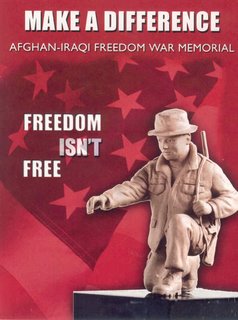 As the Deaniacs in Salem foam about the Afghan-Iraqi Freedom War Memorial because it “glorifies war” instead of urging peace (at least I think that’s their complaint) it’s worth noting just what sacrifice really means and how unworthy MOST of the rest of us are. Please read the following from a column in the Dallas Morning News. The link follows.

A flight with an honor guard and fallen Marine reveals the meaning of service
“When you fly as often as I do, you learn to mind your business as soon as you take your seat. But that wasn’t possible once I saw the military honor guard boarding a recent US Airway flight from Boston to Washington.I was heading through the gate when I noticed Sen. Ted Kennedy walking down the concourse. I stepped aside and followed him down the ramp.

As we got to the entrance of the plane, the members of a Marine honor guard in their dress blues were coming up the outside staircase usually used for stowing strollers and allowing mechanics on board. The Marine in charge held in both hands a flag that had been folded into a triangle as if it had been draping a coffin, which it had.

Down on the tarmac the white gloves of eight Marines snapped their final salute as the doors of the hearse closed.

Mr. Kennedy extended his hand to the Marine and said, “Thank you for your service.”

“Thank you, sir,” replied the Marine.

“And the funeral is at Arlington Cemetery?”

The Marine went to sit in coach, but a man in the first-class cabin went over to him, shook hands and offered his seat. The Marine reluctantly accepted. Half the passengers broke into applause.

The rest of the flight was uneventful, though quieter than usual. When we landed, the Marine took his white gloves from where he’d stowed them inside his hat, put them on and again gripped with both hands the precious cargo of the folded flag.

Then he went over to two people quietly sitting in first class – the parents of the fallen Marine. None of us had known they were there.

He escorted them off the plane and into the terminal. Because of the afternoon’s oppressive heat, he had persuaded them to wait inside instead of on the tarmac.

The father looked as if he might have once been a Marine himself, a handsome man of perfect posture, with bristly silver hair. The mother, blond, wore light-colored pants and an orange jacket. They both looked calm, if a little lost.

They stood at the window between Gates 43 and 45 and watched as a full Marine honor guard marched up the tarmac, coming to attention between the plane and a silver military hearse. The unloading of their son’s coffin from the cargo hold was very slow, and every time someone inside the terminal noticed and stopped to stare, someone else noticed and did the same.

The mom leaned her elbows on the window ledge. She stared for 10 or 15 long minutes and never moved. The father stood nearby, rocking from foot to foot and pacing a bit. They did not say a word to each other.

Except for a handful of us standing frozen at a respectful distance from the window, the war and its carnage might as well have been on another planet. The disconnect between those who serve and those of us who are beneficiaries of their service has always felt great to me, but never greater than at that moment.

The mom and dad … waited until the Marine in charge came up from the runway to escort them to a government vehicle. I went to my car and drove to work with no ambition for the day other than to be worthy.