Stand Up for Religious Freedom Rally Disrupted by Hater

There is nothing more basic in the United States of America than religious freedom. Religious freedom is the first enumerated right of all Americans and is God given. Our rights are, as the founders said, “self evident.” As it says in the First Amendment of the US Constitution,

ObamaCare’s requirement that all health insurance cover abortifacents, sterilization and birth control is a slap in the face to–especially– the Catholic Church. Forcing the

church to provide this coverage is an abridgement of their practice and free exercise of religion. You might be able to make a case that the President replaces this religious belief with his own secular beliefs, thus establishing a religion.

But can you hold a pro religious freedom rally and have official Portland show up? Will the (now former) Attorney General of Oregon, who shows up for every AIDS walk and health care rally, show up to support rights in the United States Constitution?

No. He actually is cheer leading this kind of intrusion. See his letter nearby. 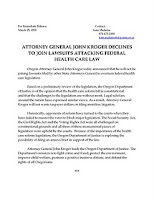 You can get hundreds of Occupy Portland people to trash parks and agitate for phony “rights” to free stuff from the rest of us, that is when they weren’t making Molotov cocktails, but can you get those same people to show up to defend a real right in the US Constitution? A right being assaulted by their President? No.

Will the ACLU join the chorus of boos about this imperial-like assault on our fundamental freedoms enshrined in the US Constitution? No.

Did the Portland are Catholic Archdiocese send representatives to attend even though Catholics are taking legal point on this case? Not that I know of.

However this guy showed up:

So it was that as many as 300 people attended the Stand Up for Religious Freedom event at noon on Friday in downtown Portland. 300 people. It should have been 3,000. Yes, it was a successful event in the middle of the work day but this is a serious issue. It’s everything.