Scott St. Clair: The ObamaCare Decision; The Only Surprise is That Anyone is Surprised 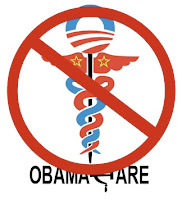 Obamacare is constitutional, says the United States Supreme Court – now what?
At the outset, I’m neither shocked nor surprised at the outcome. Like most common-sense people I regard Obamacare as an abomination and a one-way ticket to bloating the federal budget even more than it is. But I also know something about courts and the law, so I never expect a court to do what everyone thinks it will or should do – courts do what they do. Welcome to a hard dose of judicial reality.
But in that reality is a great big club – the right club – that will beat the beast to death: The hatred Americans have for being over taxed, especially to the tune of $1.76 trillion. Obamacare is now the largest tax increase in American history.
From my early days in activism I learned that relying on courts for your
political salvation is a fools’ errand. Political issues can only be decided where political issues are always decided, and that’s in the streets, at the ballot box and in the Legislature, in this case Congress. Obamacare is a political issue, and it ultimately must be decided politically.
By upholding the individual mandate as a tax, Mitt Romney now has a new campaign tag line that will damage President Obama and the Democrats: The Obamacare tax on the middle class
Tax, tax, tax, tax, tax, tax – say it often enough and it will stick.
So, there’s some comfort to be taken from this statement found at the outset of Chief Justice John Roberts’ majority opinion: “We do not consider whether the Act embodies sound policies. That judgment is entrusted to the Nation’s elected leaders.” And I would add it includes the judgment of the voters.
The court took pains to emphasize its tradition to bend over backwards, if necessary, to uphold a legislative act rather than strike it down. By calling the Obamacare individual mandate a tax rather than a penalty for not engaging in commerce, the Court found a peg upon which to hang its judicial robes.
In simple terms, I defer to SCOTUSBlog.com, which said:
“There were not five votes to uphold (Obamacare) on the ground that Congress could use its power to regulate commerce between the states to require everyone to buy health insurance. However, five Justices agreed that the penalty that someone must pay if he refuses to buy insurance is a kind of tax that Congress can impose using its taxing power. That is all that matters. Because the mandate survives, the Court did not need to decide what other parts of the statute were constitutional…”
I’ve read a lot of court opinions in my time that do pretty much what’s described – it’s just that this time, the stakes were much higher.
What made me nervous during the run up to the decision was the proliferation of pundits and amateurs making cock-sure predictions that the law would be struck down. When the like-minded talk exclusively with each other, they convince themselves that their hopes are facts and that their facts control. Courts don’t work that way, and people need to understand that.
Literally, within seconds of the decision and opinion being made public, the Internet was swamped with what I can only call dopey statements from the know-nothing wing of the conservative movement. “Chief Justice John Roberts is now dead to me.” “Impeach the Supreme Court.”
Perhaps the worst was this one dumped on one of my Facebook posts on the decision: “Bush screws us AGAIN! This is how Progressives work and to say that people wanted Jeb Bush to run as Pres or VP?!” Even people ostensibly on our side of the political fence blame Bush.
Because we’re now faced with the political reality of the survival of Obamacare, it’s a waste of time, and politically lazy, to blame it on judges, Democrats, Congressional Republicans, George W. Bush or anyone but the person we see every morning in the mirror. In other words, let’s screw our courage to the sticking place, quit worrying about what your boss or your neighbor or your kids think about your beliefs, get out into the streets, organize the socks off everyone you know and fight like hell without rest until Obamacare is repealed.
Or get used to it.
Tell ’em where you saw it. Http://www.victoriataft.com