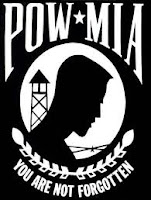 POW/MIA Recognition Day in the United States is observed annually on the third Friday of September by Act of Congress. It affirms our American commitment to honor all those who served and suffered in defense of our liberty as prisoners of war, and our commitment to ultimately account for all of the more than 80,000 military still missing in action from WWII until the present wars against terrorism in Iraq and Afghanistan.
The service and sacrifice of our American prisoners of war and those missing in action deserves to be recognized, and remembered. Our children, and all future generations of Americans, and, in particular, immigrants, should be educated as to the service and sacrifices of American prisoners of war, and those still missing in action.
However, POW/MIA Day, like so many patriotic observances and holidays, is rarely, if ever observed, in contemporary American schools. American children are not being taught their own history and heritage.
More information on POW/MIA Day is available from The National League of POW/MIA Families. Please see their website at www.pow-miafamilies.org. Note in particular the press release of the POW and MIA Families signed by representatives of all the major veterans service organizations objecting to the fact that the Department of Defense is reneging on the commitment to search and account for those still missing in action.

The American Ex-Prisoners of War provide much information on prisoners of war at their website: www.axpow.org.
In recognizing and remembering POW’s and MIA’s, it should be remembered that their families served and sacrificed, too. Their families most often did not know  whether their loved ones who went off to war to defend American freedom were dead or alive. The families of the more than 80,000 still reported as missing in action, including over 1,600 from Vietnam, are still in grief and wonder as to what was the fate of their loved ones.
Many American POW’s from the Vietnam War have written books on their treatment by Communists in Vietnam. Those books ought to be in every school library – but few if any are.
The tortures endured by American POW’s at the hands of North Vietnamese communists led by Ho Chi Minh, who was celebrated as an iconic hero by the American Left and so-called Peace Movement in the Vietnam war, were unimaginably horrific – but true.
Every American who reads their accounts is called to question:  “Could I have endured that?” “Would I have betrayed my country in that torture?” And: “How did they survive it?
The POW’s who have authored books, universally state that what enabled  them to survive, to remain sane, and to adhere to the code of “Duty, Honor, Country,” was their faith in God, their love of family, and love of country.  In short, fidelity to faith, family, and freedom.
Without at all ignoring the value of all the books authored by former POW’s, allow me to recommend a few from my own library, which have informed, and moved, me, as perhaps they will you:
First, most recently, “When Hell Was In Session,” by Rear Admiral Jeremiah A. Denton, Jr. (USN, ret.), former U.S. Senator from Alabama,  the second longest-serving POW (seven years/seven months), has been re-issued in a new edition with a new epilogue by WND Books, published by WorldNetDaily.com. He is perhaps one of the best known POW’s to Americans due to the fact that when his communist captors tried to use him for propaganda purposes in a television interview, he blinked “T-O-R-T-U-R-E,” in morse code, confirming that American POW’s were being tortured. He also refused to speak against his country in the interview. He was terribly tortured, almost to death. Admiral Denton  was also designated by his comrades as spokesman for the first group of POW’s to come home on Feb. 15, 973, after
It has been my great honor to be able to work with Adm. Denton in such efforts as fighting the ACLU over its abusive and profit-making Establishment of Religion attacks on the Mojave Desert and Mt. Soledad Veterans Memorials because of crosses honoring veterans. I have also worked with him in relation to his joint public statement with Maj. Gen. Patrick H. Brady published by WND.com opposing the open homosexualization of the military culture by repeal of Don’t Ask/Don’t Tell. And I have appeared jointly with him in radio broadcasts.
But had I never known, worked with, or been called a patriotic comrade and friend by him, I would recommend  his “When Hell Was In Session” as a must read, an inspiring classic.

— Navy Lt.(jg) Everett Alvarez, Jr., the longest serving POW, recounts his captivity in “Chained Eagle: The Heroic Story of the First American Shot Down over North Vietnam.”
— Leo Thorsness, who received the Medal of Honor, has written his remarkable account of American captivity in “Surviving Hell: A POW’S Journey.”
— The legendary Bud Day, America’s most decorated warrior, a veteran of WWII, Korea, and Vietnam, is referred to for his inspirational leadership as a POW in all of the POW memoirs which I have read. He has told his own story in his autobiography, and his story is told by author Robert Coram in “American Patriot: The Life And Wars Of Colonel Bud Day.”
—  Navy pilot and now Sen. John McCain was Bud Day’s cellmate in the “Hanoi Hilton.” Offered early release by the North Vietnamese Communists for propaganda purposes because of the status of his father and grandfather, both four-star Admirals, John McCain refused. Rather, he insisted that he receive no special treatment and that he be released in the regular order of time-served as a POW. He was terribly tortured for refusing special treatment. Those who think they know John McCain should read his own, humble, memoir: “Faith Of My Fathers,” and Robert Timberg’s book: “John McCain: An American Odyssey.”
–Admiral James (Jim) Stockdale, who received the Medal of Honor, is referenced for his leadership by this co-POW’s in their books. He authored several books, my favorite of which is: “Thoughts Of A Philosophical Fighter Pilot.”
–A comprehensive telling of the story of American POW’s is John G. Hubbell’s “P.O.W.—A Definitive History Of The American Prisoner-Of-War Experience In Vietnam, 1964-1973.”
— Last but far from least in value, is the remarkable book “A Code To Keep”by the remarkable Ernest C. Brace – now an Oregonian –who is, technically, America’s longest held “civilian” prisoner of war in Vietnam. Ernie Brace, who had served in the USMC, was taken prisoner when later flying as a civilian pilot. Although technically a civilian, Brace adhered to the Code of Military Conduct while enduring appalling torture, including being periodically buried up to his neck for escape attempts, kept in a bamboo cage in which he could barely move, and in which he was rarely fed, and beating-after-beating.  After surviving unimaginable tortures, Ernie Brace returned to America; became successful in business first on the East Coast then the West;  and now resides in Oregon.  His was active in the “Veterans For McCain” campaign for President in 2008.

May the American nation they served,  embrace and honor each and every prisoner of war who served honorably, each member of the military services missing in action, and each and all of their families on annual POW/MIA Recognition Day, and on every day.
[Rees Lloyd is a longtime civil rights attorney, a veterans activist, and a member of the Victoria Taft Show Blogforce.]
Tell ’em where you saw it. Http://www.victoriataft.com