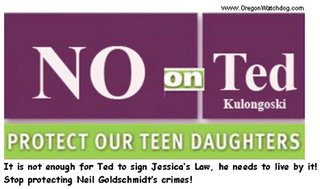 The Goldschmidt Affair Democrats, Sex Crimes and the Press
By FRED LEONHARDT

(VICTORIA’S NOTE: From Counterpunch. Wish I could have gotten Fred Leonhardt’s story, Lord knows I’ve called him enough, but I will say this: at least he did this before Oregon voters make the same mistake twice and hire Ted Kulongoski. Fred didn’t want to come on my show because he says I’m too partisan and his appearance would be perceived as a political move to intentionally hurt Kulongoski. But Fred told me he is just sick of the cover up and for Ted and other FON’s (Friends of Neil), pretending the child rape which took place over a period of three years has never been fully answered to by Neil…and his friend Ted Kulongoski, the Governor of Oregon. Who, Leonhardt says knew about Goldschmidt’s child rape/pedophilia and hired him anyway to head the Department of Higher Education and took him into his inner sanctum as an advisor during his first run for Governor.) 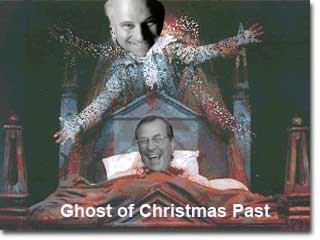 Democrats, Sex Crimes and the Press

By FRED LEONHARDT
In a lather of righteous indignation, a recent Oregonian newspaper editorial demanded that “anyone in Congress who protected Foley should be given the boot, period. And that includes (House Speaker Dennis) Hastert himself,” because sheltering a pedophile is “a truly odious act.”

The Oregonian neglected to remind its readers that such acts aren’t confined to Capitol Hill or to Republicans: In 2004 it reluctantly reported that Governor Ted Kulongoski and others in Portland’s political and business circles were accused of knowing former governor Neil Goldschmidt had repeatedly raped his children’s 14-year-old babysitter while mayor of Portland in the 1970’s.

I was the accuser.

The story of Neil and the girl had circulated for years in Portland bars and boardrooms, among lawyers, judges, reporters, editors, business executives, developers, elected officials­many of whom had gained power and wealth from their association with Goldschmidt.

No one spoke up; no one confronted him.

Goldschmidt, unencumbered by conscience and sheltered by those who knew the truth, went on to a stellar career: U.S. secretary of transportation, Nike VP, and governor of Oregon, where he was touted as presidential material. As his speechwriter (and as-yet unaware of his sordid past), I proudly helped author Neil’s “Children’s Agenda,” inspiring Oregonians to protect and defend those most vulnerable to poverty, neglect and, too often, sexual predators.

Convinced by Neil’s former state police bodyguard in 1994 that the rumors were true, I told Kulongoski, my close friend and at that time Oregon’s attorney general. But the statute of limitations had expired, and Neil had obtained a confidentiality agreement from his now-adult victim in exchange for cash.

A child rapist had not only escaped justice and public shame, he cashed in on his government career, becoming the wealthiest and most influential power broker in Oregon. Ted often used a two-word phrase to describe Goldschmidt and others like him who undeservedly attain wealth and power: “Shit floats.”

I stayed away from Neil out of disgust, and I assumed Ted would do the same.

But by 2001 when Ted was gearing up to run for governor, he told me that the hardest part of that job would be “keeping Neil at arms length because he asks me to do unethical things.”

It turned out to be harder than he thought.

During the campaign, Neil provided political strategy and access to corporate cash. As governor, Ted showered favors on Neil’s clients, and in spite of what he knew of Neil’s crime, appointed him to the State Board of Higher Education.

This reckless and irresponsible act was more than I could stomach. I took the story of Goldschmidt’s crime and Kulongoski’s knowledge to the state’s leading newspaper, expecting to unleash a firestorm of outrage.

Instead, I encountered a conspiracy of silence and, even more sickening, indifference.

The Oregonian sat on my story for five months until its local rival, Willamette Week, exposed Goldschmidt’s past in an investigative report that would later win its author, Nigel Jaquiss, a well-deserved Pulitzer Prize.

As Jaquiss also revealed, mine wasn’t The Oregonian’s only warning. At least one senior editor and the Oregonian’s editorial cartoonist had been tipped off as early as 1986 but had done nothing.

In the aftermath of the scandal’s revelation, Portland’s elite — even my former colleagues from the governor’s office who, like me, are the fathers of daughters — collectively shrugged off the consequences of a girl’s life destroyed. “Look at the great things Neil’s done for Oregon,” they would tell me.

Besides, they said, “She must have looked older than 14.”

No longer able to ignore my accusations, The Oregonian finally published my story. As a result, an editorial titled, “Ted Kulongoski’s Responsibility,” demanded that he “answer hard questions about what he knew and when about Goldschmidt’s past sexual abuse of an underage girl.”

He never answered those questions. But then, no reporter ever asked them.

A few weeks later, The Oregonian’s interest had already evaporated; a subsequent editorial referred to Kulongoski as “a man of great integrity.”

And one editor recently wrote, “he’s honest to a fault and he cares more about the future of Oregon than his own political career.”

But why pick on the Oregonian? Ben Bradlee, former Washington Post editor, once said, “Even the very best newspapers have never learned how to handle public figures who lie with a straight face.”

Meanwhile, under a governor who wants kids to know he’s “on their side,” the plight of abused and neglected children in Oregon grows worse while the shame of Oregonians grows less.

Last Halloween, a local lawyer and his wife attended a costume party dressed as “Neil and the babysitter.”

This year’s horror story is a choice for governor between a Goldschmidt lackey in Kulongoski, and a Goldschmidt consigliere in Portland lawyer and Republican, Ron Saxton.

So Speaker Hastert, I suggest you adopt Kulongoski’s playbook for political survival: First, issue a statement saying that you are “greatly surprised, saddened and upset” by the revelations, and that your heart goes out to the victim. Deny you were ever warned about any sexual misconduct with a minor. Repeatedly refer to your own troubled childhood as a reason why you would never protect a pedophile. Then wait for scandal fatigue to set in.

It worked for Ted, it might work for you.

“We’re not worried about the issue,” Kulongoski’s pollster said during his re-election campaign last spring, “because the governor has made it clear all along he knew nothing about the horrible set of circumstances.”

Repeat after me, Speaker Hastert: “I knew nothing.” Join the legions of enablers who protect the Foleys and Goldschmidts of the world for their own personal gain.

Because in Washington, D.C., as in Oregon, for the privilege of being in on “the deal;” for funds raised and favors granted; for journalistic access to the powers that be; for high political office followed by a high-paid lobbying job ­ children’s lives and the public trust are expendable.