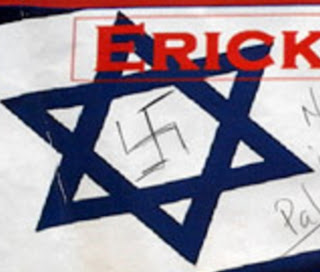 Portland State University has an antisemitism problem on its hands and the University should use its authority to repudiate it–and fast. The latest evidence is a Nazi swastika scrawled on a flyer for an event tonight on campus by the groups Stand for Israel and Christians United for Israel (CUFI). See the image nearby. 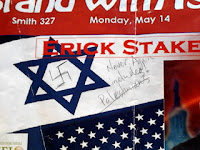 
Anti Israel groups plan a “silent protest” of the event.  But these groups have made their presence on campus quite well known in the past.

The students in the Middle Eastern Studies Department recently hosted an Anti-Israel / Pro-Palestinian rap group called DAM. The group’s music calls for peace but, in typical Hamas fashion, at the same time calls for the annihilation of Israel.  DAM also made an appearance at Portland’s Lincoln High School. See posts here and here. 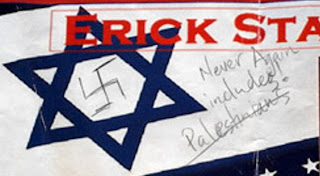 In 2008 the University considered but soon dropped plans to hire notorious anti Semitic professor, Joel Benin, to lead the Middle Eastern Studies Department. Benin has the unsavory distinction of being labeled by David Horowitz as one the “100 Most Dangerous Academics” in the country.  See my post on it here. 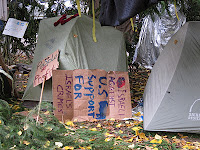 Portland’s terrorism ties are well known as has been explained countless times on this blog and observed by Steve Emerson at his Investigative Project website.

Portland State has also been supportive of other groups that hate the existence of Israel, including Occupy Portland, which was overtly antisemitic as seen by their posters at their recent encampment. 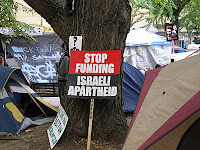 In fact, Portland State University now gives out credit to students who participate in Occupy Portland activities. Wonder if antisemitism is part of the class? See post on this blog later today.

The answer you’ll likely get from Portland State University on the antisemitism on campus is a dial tone or unreturned phone calls. You might get a flak who tells you, “We welcome all points of view.”
Imagine if the pro Israel groups welcomed a speaker who called for the annihilation of all Muslim countries. Do you think the wags in the PSU front office would roll out the red carpet for him? Welcoming all points of view and entering into a moral equivalence are two different things.

And it says more about Portland State University leaders that they can’t tell the difference. Indeed it says a lot and probably more than they wanted you to see.