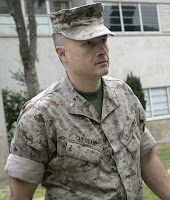 The Board of Inquiry came back Friday night but I just heard from the Thomas More Legal Center which helped Chessani’s military attorneys with the case and have a rundown on what it all means:

…the military Board of Inquiry ruled LtCol Chessani was not guilty of misconduct and should not be demoted.

Nevertheless, the Board’s ruling produced a mixed result.  It ruled Chessani must now retire because he displayed “substandard performance” by failing to conduct a more detailed investigation of the civilians killed as a result of the house clearing actions of four Marines after they were ambushed in Haditha, Iraq on November 19, 2005.

The Board’s decision came after a 1½ hour impassioned closing argument on behalf of LtCol Chessani made by Thomas More Law Center attorney Robert Muise.  Muise argued Chessani was a scapegoat to appease the anti-war media and anti-war politician John Murtha.  “Here’s your scapegoat.  Here’s your fall guy, ” said Muise as he pointed at Chessani, who sat silently at the defense table.

Richard Thompson, President and Chief Counsel of the Thomas More Law Center, commented, “It’s indicative of the weakness of the government’s case that it could not prove misconduct at the Board hearing where the normal rules of evidence didn’t apply and the burden of proof was lessened.  We are all greatly relieved that the Board ruled LtCol Chessani was not guilty of misconduct and should not be demoted, However, I believe the overwhelming evidence supported a total and complete exoneration of LtCol Chessani.”

Not one of LtCol Chessani’s superiors ─ including top generals ─ who received his report of dead civilians considered such deaths unusual.  Not one ordered a further investigation.  Instead, they commended him for a job well done.  In fact, LtCol Chessani’s immediate superior told him that no investigation was needed because it was a bona fide combat action – consistent with the orders in effect at the time: no investigation of civilian deaths related to combat action.  That order was changed in April, 2006, well after the Haditha incident.

Consequently, not one of LtCol Chessani’s superiors faced, nor will they ever face, a court-martial or a Board of Inquiry for their actions in relation to November 19, 2005.

One of the eight Marines brought up on charges for the phony “massacre” awaits legal action, the rest have all been exonerated.