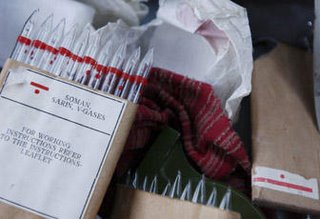 In the last of the documents of this release, an undated memorandum from the director of the IIS to the Military Industrialization Commission (MIC) discusses counterintelligence information regarding an informant with knowledge of the locations for Iraqi WMD programs. Document ISGZ-2004-007589-HT-DHM2A directs the MIC to change the locations of their assets (emphases mine):

We were informed by one of our sources working abroad, that foreign intelligence is working to obtain information about some military and scientific targets in the Country. The undercover source provided us with a map of the targets, for which he was assigned to gather information during his visit to the Country. For the purpose of pointing out the enemy’s interest, and to enable you to maneuver by changing the locations of these targets, in order to foil enemy’s plans, we hereby list the following:

1- He was presented with a map by the Foreign Intelligence, indicating the nuclear sites in the Country. Our source noticed that most of the sites are located near Mawsil and on the Tigris River, and some on the outskirts of Baghdad.

2- Another map indicated the Chemical sites, of which most are located in the suburbs of Baghdad, north and south of the city. It was noticeable that the sites north of Baghdad were more numerous than those in the south. The Map also marked some sites located on the outskirt of Mawsil City.

3- The third map marked the sites of long range Missiles.

4- A satellite image of the Al-Taji area, indicated orchards located in the triangle of Kirkuk-Mawsil Road, after the Baghdad Gate. Our source was informed that missiles and important military equipment were hidden in these orchards. He was asked to go to the area and observe whether it was well protected by military units and check the presence of any radar [TC: Satellite Dishes] in the area.

5- There are a large number of hidden missiles in the Al-Mahawil and Jubaylah area.

6- There is a warehouse for chemical material in the Al-Mahmudiyah area.

7- On the Baghdad-Falujah road and near Falujah checkpoint, there is a nonfunctional Cement Factory, which is being used for storing Chemical materials. Please observe whether there is any protection around the Factory.

8- Missiles were hidden in the triangle located near the Presidential Palace along the highway to Saddam’s International Airport.

9- There is a missile testing laboratory in the Al-`Amiriyah area.

10- There is secret airport designated for emergency use in the Al-`Aziziyah area, where sixty-five missiles are hidden.

11- Chemical materials were moved from the Al-Qa`qa` depot and hidden in the Industrial High School in Al-Musayib, in the Agricultural High School at al-Yussifiyyah, and other specific schools in al-Mahmudiyyah.

The MIC had responsibility for all of the WMD programs, including their development, production, distribution, and storage. The message from the top man at the IIS was clear: this information was correct, and the MIC needed to act fast to move the assets around to keep them from discovery. Counterintelligence found out about his visit in time to make the changes necessary.

The Iraqis had WMD. They knew when to move them to keep them from being discovered — a task for which they apparently had abundant talent.