I Was Right: Occupy Portland is Over. Does the City Know It Yet?

Sure, this is an “I told you so moment,’ but aside from that fun, have you noticed that Official Portland and even the Occupiers themselves are beginning to come around to my way of thinking?

That’s why I’m running this blog post from a couple of weeks ago again.
I’ve interspersed videos and pictures to further underscore my points:
The leaderless Occupy Portland leaders now tell us they never wanted this. They didn’t want the collection of street punks, gutter snipes, tweakers, kaffir clad anarchists at their political circus in downtown Portland. That’s a lie. Yes they did. The Occupy Portland folks wanted as many bodies as they could get out for their illegal march and illegal occupation. They went to their natural allies—the unionists, socialists, anti Jewish-Pro Palestinian activists, communists and anarchists among others—and invited them. And they came. And Occupied.  Now that the world is literally and figuratively sniffing the truth, these ‘leaders’ want to distance themselves from the mess they created.
The saying goes, “If you break it, you fix it.” Well, Occupy, I’d tell you to fix it, but it’s too late for that. The City of Portland’s Mayor and Council are too politically invested to let you off that easily.
Occupy Portland ended the day it began. Thursday, October 6th was the day when the non-leader-leaders fulfilled their promise to break the law. They gave nothing to the cops and the Mayor’s office. No permits, no signatures, no indemnification, no map. They came with their bullhorns, bizarre call and response method of communicating and simply broke the law.

They made good on their promise of anarchy.

Official Portland bent over backwards to try and make their disregard for civility and the law seem noble. The day of the first protest and after they’d broken the law, Portland Mayor Sam Adams ‘thanked’ the protesters for their ‘cooperation.’
Possibly five thousand people came to march in the streets to protest some amorphous evil blob out there; rallied at a place for which they refused to take out a permit and pay the fees, and then took over two parks and closed a street.

Then those people left. Yes, they left behind a few true believers—maybe 1% of this collective. And joining them?  The usual rabble from the street. These are the tatted, plugged, tweaked street kids whose main occupation is to drag their pitbulls to their next act of larceny.

The Mayor’s inability to finesse the Occupiers out created instant civic problems. The Portland Marathon needed the park and street where Adams had let the Occupiers squat.
What to do? Give in to extortion again, that’s what.

The Mayor convened a meeting to tell the Marathon how it should accommodate the Occupiers. The compromise? The Marathon could still pay for all permitting and use most of the park but the Occupiers could stay. The Marathon issued an obsequious statement about how wonderful the Occupiers were and how they would share the space. Crisis averted.
Days later, Adams and Commissioner Randy Leonard joined one of the Occupy marches. Adams cooed later that he’d never seen a more organized protest and was so proud of them. 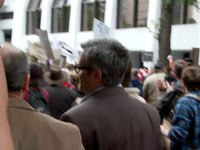 But by the time the Mayor and Commissioners had mingled with the Occupiers and pronounced them ‘good,’ it was clear who they were. The street people clearly outnumbered the protesters.

Commissioner Amanda Fritz met with the protesters and through the bullhorn told them how pleased she was they were there and how they could stay as long as they wanted. She told them their first amendment rights to speak were more important than any city ordinances.  Fritz apparently hasn’t read that the City can set time, place and manner restrictions on speech.

Mayor Adams left Fritz in charge when he left town to visit China.

Crime has taken hold. A black videographer was verbally assaulted by Occupiers calling him racist names. The VIDEOGRAPHER was arrested for showing the thugs his licensed gun. A registered sex offender lists Occupy as his home and the encampment has 10-20 children living there. Marijuana smoke is everywhere. There’s a shooting gallery inside somewhere judging by the cars full of sketched out kids spilling out only to come back ten minutes later as serene as a nun at vespers. If you’re worried about second hand smoke and its effects on your health, don’t go to Occupy Portland. Big Tobacco is encamped here, too.

The only Commissioner cranky about the Occupiers is Nick Fish, the Parks Commissioner, who asked that Occupiers be removed soon because they were hurting the trees, grass and bushes of the park. Ropes lashed onto trees support the Gilligan’s Isle-like latticed wall made of twigs and vines. One of these walls shelters the spiritual “Sacred Place” which includes anti Semitic signs. 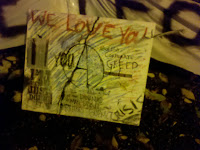 for a year. However, Occupy Portland has been told it can stay as long as it wants.
McCain was told he’d have to go through five bureaus to get permissions, get a million dollar indemnification and post $50-$1000 in fees to start. And that was just the beginning.
Occupy Portland threatened to break the law and got everything for free—including undeserved respect. 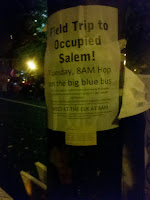 Occupy Portland has done more damage to the City than mere rope burns on trees. It has dispirited law abiding Portlanders who see that if you’re part of the Mayor’s base you are treated differently under the law. If you doubt this play the “If this were the Tea Party” game.

Regardless, Occupy Portland was over when it lost its moral moorings. It ended when City had to prop it up. Whether they know it or not, in its current form Occupy Portland is Over.