Gunman Kills 3, Wounds 6 the Day After Teamsters Leader Calls for “Take Them SOB’s Out.” 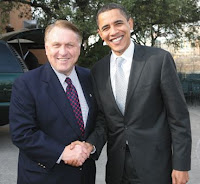 Jimmy Hoffa Jr., leader of the Teamsters Union outraged some people recently as he stood before a crowd, introducing Barack Obama saying, “President Obama, this is your army. We are ready to march. Let’s take these sons of bitches out and give America back to an America where we belong.” I say some because apparently, such incendiary rhetoric coming from a Democrat is acceptable.

We know that anything said by a conservative is quickly linked to any subsequent crime or tragic event, as we saw this past January when Democrat Representative Gabrielle Giffords was shot, others killed and wounded by an apparently mentally disturbed young man.

It didn’t take but minutes for the propaganda machine to rev up blaming the shooting on Sarah Palin, Rush Limbaugh, Republicans and conservatives of any sort. That there was absolutely no evidence of any nature of any political intent or linkage made no difference, liberals went on a verbal rampage of condemnation and many continue it even after it has come out that the shooter, Jared Loughner had no political affiliation other than a last known liberal leaning years ago.

That was quickly ridiculed and the manufactured outrage directed at conservatives continued to fly.

The media did little, if anything at all, to correct the rhetoric, sometimes adding their own manufactured connections to the fray. Barack Obama chimed in with a call for ratcheting it down and for more civility.

Not even he toned it down; he just tried to mask his accusatory rhetoric in the succeeding months. Neither he nor any other Democrat has come forward to condemn Hoffa’s incendiary call of “take these son of bitches out,” some diverting the discussion, one White House Press Secretary Jay Carney saying, “Mr. Hoffa speaks for himself. He speaks for the labor movement, the AFL-CIO,” adding when pressed a little further, “Can we move on?”

Unlike January’s shooting, blinders seem to have gone up today as we read National Guard Members Among Four Dead in Carson City Nevada Shooting Rampage the very day after Jimmy Hoffa Jr., acting in his capacity as head of the Teamsters Union and introducing Barack Obama called for “taking the son of bitches out.”

Just like when Ms. Giffords was shot, there is no known motivation for this shooting. There is no known affiliation between the shooter and anything. But, unlike this past January, no one in the media or the Democrat party is leaping forward to call to create a connection when it is one of theirs that has made such an incendiary comment and a mass shooting immediately follows.

Hypocrisy, thy name is liberal Democrat.

America is more divided than it has been in decades and such inflammatory rhetoric and double standards in excusing it from the left and the media supporting the left just continues to fan the flames of division.

It is time to call Democrats on this “never let a crisis go to waste” rhetoric as they strive to conquer the country and impose their views and their views only upon us.

It is time for voters to stand up to this over the top rhetoric and double standard coming out of the lamestream media.

If we wish to save America and become prosperous again, it is time to cast these divisive tactics out from our midst, vote these people out of office and ignore the lamestream media as they fuel this divisive conduct.