Goose Round Up at Westmoreland

Audubon Society folks say they’ll “round up” about a 100 geese and ducks from Westmorland and “relocate” them. Woot!

They should just gas the varmints and make goose stew for the homeless like Bend did.
“Relocate” them? You’re kidding, right?
Nobody wants them. Geese and their poop are disgusting.
Nothing looks more regal than a flying V in the sky. Then they land and all poop breaks loose.
People say I hate geese. Yes, but it’s a well earned hate-hate relationship.
I love birds. Before they decided to force us to welcome killer coyotes into our midst as part of the “urban landscape” (I’m not making that up), I was actually considering extending my membership in the Portland Audubon Society.
My loathing of all things goose poop started when my youngest daughter was in her itsy bits soccer league. The post game huddle would break up, someone’s parent would hand out the Gatorade and Rice Krispy treats and eventually she’d meander back over to the sidelines seeking out Mom and Dad.
Then it would start. “My cleats are disgusting!” “Ugh!” When I would inquire why she’d pull a wretched face and say, “Goose poop! Blech!” I would look at my husband, who spent the game pacing the sidelines and he’d nod in agreement.
You want inside my car? Take off the shoes. And don’t even THINK about wearing those disgusting things in my house.
That’s the way Saturdays would go.
At first we’d arrive at the field and say, “Hey, it looks like they aerated the field!” No. It was acres of goose poop and our kids were expected to play in it.
“Heh, heh, no slide tackling now kids!” The score was never something-nil, it was something-goose egg. Ick.
But forget the grossness factor for a second, what about the health factor?
Back in the old days when I worked in my short lived stint as an intern for a show about the San Diego Zoo, the crew got an insider’s tour. We marveled at how clean the place was. I mean think about it, the frosty crank wombat has to go SOMEwhere, right? Where is all the poop, anyway? And, come to think of it, where are all the pigeons divebombing the hippos? There were more peacocks than pigeons in the zoo!
Then our guide told us the story about the Hotel Californias for the pigeons. They’d check in but they’d never check out. Poof. No pigeons.
Think that’s mean? What if you’d spent a gazillion dollars for Charlie the Bear and he died of one of the many strains of bacteria and parasites contained in the pigeon poop streamed into his system after vigorous grooming session?
But screw Charlie for a second–come to think of it, Charlie’s claim to fame was that he was ALWAYS happy to see you—what about the humans coming into contact with all that bacteria?
Which brings me back to Portland and goose poop.
The City and Audubon officials say they’re “relocating” geese from Westmoreland because they’re threatening the stream of water that goes into Johnson Creek.
For the record and a little less politely, that means the starlings with bills (geese) are pooping in the water.
Ever drive down McLoughlin and see all those geese hanging out at Westmorland Park next to the kids going to baseball camp, playing softball and learning soccer? Why aren’t we worried about them?
They’ve fought geese in Yamhill County, Bend, and in Salem to name but a few. Why not get serious here?
Before he died of cancer I would walk my big boy Bullmastiff Maxie in Willamette Park. It was there my disgust of geese and goose poop grew to new levels heretofore unimagined. 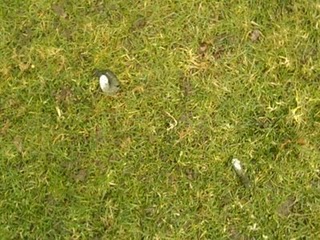 Geese had overrun the place. You couldn’t walk on the paths or grass without drenching your shoes in the stuff. You couldn’t sit on the grass without ten mil visqueen. The geese would get mean and chase you. They frightened my Maxie.
Other parks had similar problems. Laurelhurst, natch. Esplanade, ick.
Commonwealth Park in Beaverton was an interesting study, however.  That park had more ducks than geese. I wondered why. The answer was found in the multi language sign begging people not to hunt and eat the geese.
They might be on to something there.
Tell ’em where you saw it. Http://www.victoriataft.com