Carousel of Crime and *Update 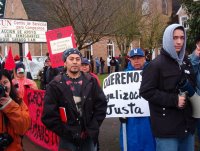 *
UPDATE: thenewspaperofrecordHA! says there were 500 opposition protesters? If that’s so then we had more than 100 (hint: we didn’t).


Do you know what was surreal about Saturday’s pro LEGAL-immigration rally by about 60 law abiding citizens? The fact that on the other side of that Woodburn street were a couple hundred of these guys (thanks to Daniel’s blog for the pix) demonstrating in favor of breaking the law. The ‘other guys’ included members of the Industrial Workers of the World Union (the Wobblies). Yes, I know, I thought they were extinct too, but apparently they show up with banners for times such as these. Who knew the illegal alien supporters would turn to the communist party for support? Here’s a portion of the Wobblies mission statement:

Instead of the conservative motto, “A fair day’s wage for a fair day’s work,” we must inscribe on our banner the revolutionary watchword, “Abolition of the wage system.”
It is the historic mission of the working class to do away with capitalism. The army of production must be organized, not only for everyday struggle with capitalists, but also to carry on production when capitalism shall have been overthrown. By organizing industrially we are forming the structure of the new society within the shell of the old.

The counter protesters were called out by Ramon Ramirez, the head of the illegal alien workers union. Among the luminaries were unionists (?!), communists, and assorted disaffected adults, and confused teenagers who laughed a lot. This apparently was the best they could do. And frankly, when you’re out supporting breaking the law and stealing from taxpayers what quality of individuals do you expect to attract to your protest party?

When Ramon found out Thursday we were showing up, he quickly switched the location of the so called carousel (or, if you prefer, the illegal alien freebie fest) from French Prairie Middle School to his PCUN headquarters at 300 Young Street in Woodburn. This switch to a private organization was so citizens couldn’t make a pitch to get in to a taxpayer owned venue.

I’m glad Daniel stayed till the bitter end. We couldn’t, but spent two hours out there chanting welcoming phrases such as these: Legal immigrants welcome!

My eleven year old figured it out real quick by coming up with her own slogan which most of our crowd thought was pretty good: Legal immigrants ‘hi,’ illegal immigrants ‘bye!’

Yeah, that about sums it up.