They’re changing the name of something because it reveals the city’s priorities and, frankly, people are noticing and don’t like it. That’s my opinion and it’s certainly what I’m hearing from the ‘just folks’ around Portland. The name change revelation is reported in the Portland Tribune (here): 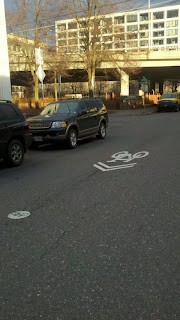 We’re all adults and know what’s going on here. The name “bike boulevard” shows it for what it is: a diss on everyone else. Now they’re putting a green veneer on it for PC, PR and probably $$ reasons (grant money, anyone?)
Portland has been doing a slow drive-by on cars for years. Liking bicyclists doesn’t automatically mean you hate cars. But I believe Portland long ago crossed the line into official car hating, if you will. Just take a look at this top of the head/back of the envelope list I came up with this morning to show you the shape of the anti car attitude.