I mentioned yesterday that I saw some poorly disguised expressions of disgust on the faces of the West Point cadets who were forced to listen to Bam congratulate himself, over and over and over, for the fine job he’s doing of demolishing America’s security, economy, and presence in the world.

I wasn’t the only one who noticed!  Michelle Malkin has video of Chris Matthews (the MSNBC cretin who famously said that watching Obama read from his teleprompter gave him a “tingle” up his leg) decrying the lack of “warmth” in the audience, and calling West Point the “enemy camp” that his beloved president had inexplicably chosen as props for this speech, instead of his famous Greek columns.  Here’s a transcript of Mr. Tingly Leg’s remarks:

It seems like in this case, there isn’t a lot of excitement. I watched the cadets, they were young kids – men and women who were committed to serving their country professionally it must be said, as officers. And, I didn’t see much excitement. But among the older people there, I saw, if not resentment, skepticism. I didn’t see a lot of warmth in that crowd out there the president chose to address tonight and I thought it was interesting. He went to maybe the enemy camp tonight to make his case. I mean, that’s where Paul Wolfowitz used to write speeches for, back in the old Bush days. That’s where he went to rabble rouse the “we’re going to democratize the world” campaign back in ’02. So, I thought it was a strange venue. 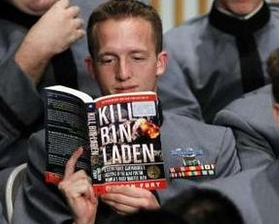 An alert photographer snapped a pic of one cadet whose expression of disgust wasn’t disguised:

Michelle reports that this guy is no ordinary cadet:
Several readers note the active service campaign ribbons and medals on the man’s chest and identify one of them as the Combat Infantryman’s Badge, showing he has been an Infantry Soldier under Combat. D. O’Brien writes: “The Cadet pictured in your piece on President Obama’s speech at West Point (December 1, 2009) is not a ‘traditional’ cadet. He is a former enlisted man – and an Infantryman who wears the Combat Infantryman’s Badge. This award is given only to Infantrymen who have participated in direct-fire engagements against the enemy.”