As we explained on the Victoria Taft Show on Tuesday, the “Bus Project” is using students who want to receive “community service” credit to graduate from high school, for door to door politicking on behalf of the “Project’s” favored candidates. In this specific case a candidate who should have known better: DEMOCRAT Cheryl Myers, the SCHOOL BOARD CHAIR running for House District 51.
The North Clackamas County School District gave at least two students credit for doing this “community service.” Notably, the Bus Project does NOT appear on any of the approved programs with which the District contracts in its “Youth Take Action” program.  Indeed, the District has a policy of approving and getting agreements from local organizations with which the students can volunteer. Again, as of Tuesday, the Bus Project does NOT appear on that list. 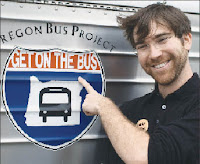 
I’ve had two conversations with people from the Bus Project about this. In each conversation these people, whom I have no reason to assume have hearing difficulties,  have tried to misconstrue my words and say I’m against ‘volunteerism’ and ‘freedom of choice.’ Of course, that’s idiotic, but ad hominem is the only thing they’ve got because the facts of this situation make them look very bad indeed. In my last conversation on the air the caller–who sounded just like the guy from the Bus Project (wow! what a coincidence!) just gave up and started hurling epithets before he hung up. Facts and logic apparently flummox these folks who fancy themselves Oregon’s best and brightest!
Seriously, however, a candidate using the Bus Project is one thing, a candidate who should know better using the Bus Project with kids getting “community service” credit for free labor for pimping a candidate is quite another.

Happily for them, the Bus Project folks seem to have that all figured out. Among the liberatti to welcome the kids when they gathered at Grant High School before they were bused to N. Clackamas: Oregon’s Labor Commission, Brad Avakian. Now THAT’s working the angles!
North Clackamas is continuing to “look into this” after we followed up a complaint by a disguntled grandmother of one of the students.
I’m not holding out much hope, however. The guy in charge of the Youth Take Action program, a principal of one of North Clackamas Schools, gave about a $1000.00 to Barack Obama in the 2008 election, according to the database check by Eric the Great.

NPC [New Progressive Coalition] was established by Silicon Valley venture capitalist Andrew Rappaportand his wife, Deborah, a longtime political activist and philanthropist. Both are major donors to Democrat candidates and causes. In the aftermath of John Kerry’s defeat in the 2004 presidential election, the Rappaports decidedto focus less on contributing to Democratic Party candidates during subsequent election seasons, and more on financing leftist issue- and grassroots-advocacy groups that would work to shape public opinion on various matters every

Here’s where the Rappaports like to give their money (source here):

Between 2004 and 2008, RFF gave $850,000 to People for the American Way, $700,000 to the Center for American Progress, and $323,000 to the anti-war group Project Billboard. In 2006 RFF sent $100,000 to the Tides Center, which in turn (on instructions from RFF) funneled the money to Allied Media Projects, an anti-corporate community-media organization where ACORN founder Wade Rathke sits on the board of directors. As of 2006, RFF’s assets totaled $7.6 million. …But there are also other groups that are not yet household names, like Youth Speaks, the Bus Project, Mainstreet Moms, and our upstairs office neighbors here in Madison, Workers Independent News.

“We strengthen community-based organizations and the progressive movement by providing an innovative and cost-effective framework for your philanthropy.” Among the crusades to which Tides contributes are: radical environmentalism; the “exclusion of humans from public and private wildlands”; the anti-war movement; anti-free trade campaigns; the banning of firearms ownership; abolition of the death penalty; access to government-funded abortion-on-demand; and radical gay, lesbian, bisexual, and transgender advocacy. The Foundation is also a member organization of the International Human Rights Funders Group, a network of more than six-dozen grantmakers dedicated to financing leftwing groups and causes. 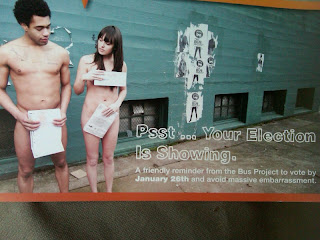 So let’s recap:
Kids are required to do “community service” to graduate at No Clackamas.
The Bus Project chooses far left candidates to tout and is a 501c3.
The Chair of the North Clackamas School District, Cheryl Myers, is running for House District 51. She is one of the Bus Projects favored candidates.

The students get credit for “Getting on the bus” and spending three hours going house to house touting the school board chair for higher office.
The Bus Project is not on the school’s approved list of charities.
Shhh…nobody notice the Bus Project and Cheryl Myers and the district are wearing no clothes.
They’ve broken their own rules, the rules of ethics and…?

Vote Patrick Sheehan for House District 51.
No, the Republicans don’t do this.