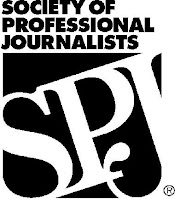 Yesterday I sent a missive to the organization which is the official organization of all American journalists, The Society of Professional Journalists.

I’m a former SPJ local President from San Diego. Have you issued a press release on this outrageous attack on a news organization?

Here’s the answer I received this morning:

We have not issued a press release on this issue. We did talk about the topic, but have decided not to make a statement.

Now I know there are a bunch of “capital J” journalists out there who would be horrified to know that I was ever in their company and part of their club. Knowing that y’all love giving each other awards and telling each other how brave you are for taking it to ‘the man’ on a daily basis, allow me to simply tell you that I’ve got boxes full of awards for: Breaking news, consumer, sports, series, and last, but certainly not least, investigative reporting from my days as a reporter/anchor/radio talk host in Southern California. I am the first President of the local chapter of the Society of Professional Journalists who was from the broadcast realm (in San Diego). I’ve certainly attended my share of professional conferences, spoken on journalism panels, and the like. You may not like me, but I have been one of you. Regarding the Nixonesque attack on Fox News, I ask you to speak out. Be bold. Speak truth to power and take this White House to task for this attack on a news organization. If you don’t it will only confirm the worst fears we hold of your profession. Do it now.
Late this afternoon Mr. Skeel answered my query about “why” they won’t take a stand. Here’s what he sent:

I feel that lending SPJ’s voice to this disagreement will do nothing more than add to the commentary that has already ensued. If Fox News reporters have their credentials revoked, or their access restricted by the administration, we may revisit the issue at that point. Those are the types of issues we generally speak out about. Therefore, I have not asked our national president, who is the spokesperson for SPJ, if he wishes to make a statement.

Here’s the board of directors.