This week’s three-day U.S. Supreme Court hearings on Obamacare cause me to resurrect a plan I suggested two years ago on Facebook after the passage of the new healthcare law. I propose that, if the individual mandate is upheld, Congress enact, and the president sign, legislation mandating every adult in America to purchase and become proficient in the use of an H&K P30 semi-automatic pistol or equivalent. 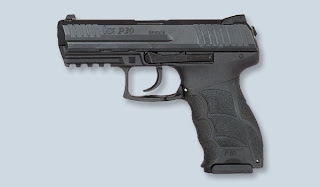 Call it an individual mandate Second-Amendment style.
That you already own a firearm of any type is irrelevant – you’ll be required to buy a new one, so please don’t bore me with testimonials about your sidearm of choice or that you don’t like guns.  And this time, I’m proposing that you will also be required to not leave home without it. In other words, every adult in the 50 states will be open-carry everywhere they go. Watch the crime rate plummet as you strap it on and take large steps!
Face it: I have more constitutional textual authority for this plan than President Obama does for Obamacare since gun ownership is specifically protected by the Second Amendment.
I selected the H&K P30 because I own one (of course, I’ll exempt myself from having to purchase another one). I bought it about a year ago on the recommendation of my oldest son, who also has one (he’ll be exempted too). Since he’s a professional soldier, who best to consult on such matters? Besides, we both shoot left-handed – my three sons and I are hard-lefties in that regard – and the P30 is ergonomically equivalent for shooters of either hand, so it’s diversity personified.
A few rules, however, since this is my plan:
Please don’t irritate me with complaints about the relatively high cost of the P30, which can go as high as $1,000 retail, though shopping around can get you one for as low as $850. I don’t care that your preferred semi-automatic pistol can be had for half the cost because the cost to you is your problem, not mine. On that score my plan is just like Obamacare where the original $940 billion cost over 10 years has near doubled to $1.76 trillion.
If the Supreme Court decides the federal government has the right to force us to buy an insurance policy, then Congress has the right to force you to exercise your Second Amendment rights. On that basis, requiring each and every adult purchase, become proficient with and openly carry an H&K P30 or equivalent is infinitely and eternally an appropriate exercise of federal power.

Next we’ll develop a plan to require each American household purchase two Chevy Volts, the allegedly “green” plug-in electric car manufactured by General Motors. After all, the federal government has a substantial ownership stake in the company – What’s good for GM is good for the country, right?-  and forcing taxpayers to buy a Volt or two may be the only way to get sales moving since few in the free market seem interested because the damned thing costs so much – $43,000 out the door GM reps tell me.
But again, the high cost will be your problem, not the government’s.