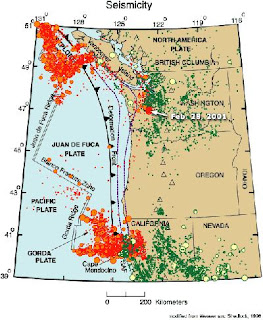 It was January 30th at 5:03 PM at night when the earthquake hit. I live 13 miles south of the epicenter that was in Amboy, Washington. For those of you who don’t know the geography of the Portland-Vancouver metropolitan area, that is northeast of the Vancouver mall. I was watching a movie with my daughter Anna and at first I thought someone had slammed the front door too hard. But then I realized it was an earthquake. It was a 3.7 magnitude earthquake.
It was in that moment that I realized we were there again. This is not about some mythical musing about the end of times. This is about the scientific fact that we will have a 9.0 earthquake. The Juan de Fuca Plate is a tectonic plate generated from the Juan de Fuca Ridge and is subducting under the northerly portion of the western side of the North American Plate at the Cascadia subduction zone. The subduction zone snaps every 350 years and we are now in the time zone.

So what do I know about earthquakes? First, I have experienced them. I was:·

And second and more importantly, I secured funding for a mapping program for some $750,000 from FEMA. At the time, I was the director of regional planning for METRO . This is the Portland metropolitan regional planning agency for the 25 cities and 3 counties, and some 1.5 million human beings. So I got the funding and managed the regional study. And that is how I learned the bad news.
I recently read a book called The Black Swan. In it written Nicholas Taleb and he uses the metaphor of the non-existent black swan. As far back as Aristotle (300 B.C.) it was believed that there were only white swans. The some 2,000 years later, they found black swans in Australia. Taleb’s point is that the unexpected happens. A turkey has a good life until the day they kill it for Thanksgiving. So the San Juan de Fuca is a black swan. Here is the reality of the big one. Keep in mind that you never thought Mt. St. Helens would explode and bury much of the region in ash. Another black swan.
The Oregonian (2-9-2013) says that “A report out this week by the advisors to the governor says that in such an event hundreds and possibly thousands of Oregonians would die and that the crippling damage to homes and public infrastructure would be so great as to crater the state’s economy by more than $30 billion.”
I am giving you maps of where the worst and best places are to live in the Portland-Vancouver metropolitan area. But you need to understand that no matter where you live here, you will need to find a way to survive for days, weeks and months. This is not a hurricane event. This is the worst earthquake event anyone can ever imagine. Things to consider.

This would more amusing if I was just some crazy guy reading Internet stories. But I was the ranking public official in the Portland-Vancouver metropolitan area when I found the truth. And now I am a doctorate student in public sector organizational development. And I am a husband and a father. I do take all this seriously.
Richard Carson was a director of planning for Portland’s regional government (METRO), senior advisor to three Oregon governors and is currently a doctorate student in organizational development at Washington State University.
References:
Oregon earthquake history: http://earthquake.usgs.gov/earthquakes/states/oregon/history.php
January 24, 2013. Offshore earthquakes near Walport, Oregon. http://www.oregonlive.com/pacific-northwest-news/index.ssf/2013/01/some_oregonians_feel_dmsll_clu.html