Ok, I’m kidding about him sitting up on the sign, but he should have to. Leonard once again huffed and puffed and attempted to bully the University of Oregon and Ramsay Sign Company into giving the city the sign. Randy said it was, “the” Portland icon and didn’t want it to fall into U of O’s evil ha 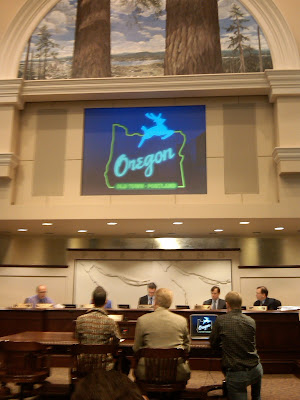 nds where the university might actually Put. Its. Logo. On. It.
When the bullying didn’t work he threatened to use the city’s power of condemnation to take it.
Great work, Randy. It’s effective to send the message that if a piece of private property for whatever reason becomes an icon to you that you’ll threaten to steal it for the good of the ‘entire community.’ Brilliant.
What’s scarier is he had the votes to DO IT!
(Aren’t these the same people who want to tear down the Veteran’s Memorial Coliseum to build a AAA ball yard? So much for tradition.)
Once again the City Commissioner blamed everyone else’s ‘miscommunication’ for getting to the precipice of a court battle (which would cost millions) and peeving the U of O which has grown its presence in P-town with a beachhead in Old Town.
One of the funnier, though unremarked upon dumb moves by Randy, was at last week’s meeting when he trotted out his photo shopped sign and left off the “Old Town” portion of the sign. That really cheesed the China town activists, one of whom testified, but whose heavily accented remark on that score wasn’t understood by the council members. Those of us sitting in the cheap seats ‘got it,’ though. The point was missed on Randy. Today’s unveiling of Sign 2.0 at council showed that the “Old Town” logo was restored.
Oh, Randy…