This is why you should BUY BUY BUY May 1st. 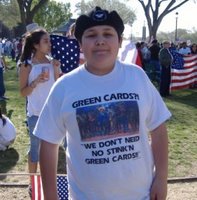 From Reuters:
“There will be 2 to 3 million people hitting the streets in Los Angeles alone. We’re going to close down Los Angeles, Chicago, New York, Tucson, Phoenix, Fresno,” said Jorge Rodriguez, a union official who helped organize earlier rallies credited with rattling Congress as it debates the issue. “We want full amnesty, full legalization for anybody who is here (illegally),” Rodriguez said. “That is the message that is going to be played out across the country on May 1.” They vow that America’s major cities will grind to a halt and its economy will stagger as Latinos walk off their jobs and skip school. Teachers’ unions in major cities have said children should not be punished for walking out of class.
In New York, leaders of the May 1 Coalition said a growing number of businesses had pledged to close and allow their workers to attend a rally in Manhattan’s Union Square.
Large U.S. meat processors, including Cargill Inc., Tyson Foods Inc and Seaboard Corp said they will close plants due to the planned rallies. “This is going to be really big. We’re going to have millions of people,” said Juan Jose Gutierrez, director of the Latino Movement USA.

13 thoughts on “Pro Illegals Vow: Cities Will "Grind to a Halt" May 1st”