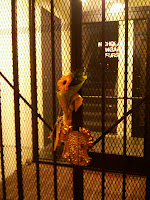 An animal “rights” nutter tried to use himself as a human torch to burn down a fur shop in downtown Portland. The man died after setting himself on fire so he could walk into Ungar Furs and torch the place while people were inside the building. Portland is whack, but not that whack. When I went by the fur store tonight after work I felt physically ill. Someone left flowers at the victimized business to martyr or commemorate the nutter who set himself on fire to “change” things. 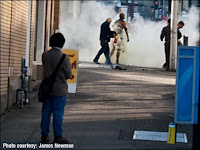 Let me tell you something Matt Rossell and your cast of profanity screaming, threatening terrorists: You are responsible for this man’s death. You egged on your buddy who had been hanging around with you “protesting” the legal business at 12th and Yamhill. This burning of a tortured soul is on your conscience.
You will not lose one night of sleep over this human’s  tortured life. You care only for furry minks.
The animal “rights” kooks claim not to know him, however a local businessman told me he recognized him as a regular protester in front of Ungar Furs. 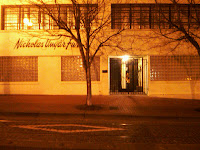 Hey, Randy Leonard, Dan Saltzman and Portland Police: this self immolation is on your conscience too. Randy and Sam this is should be your waterloo. You’ve done NOTHING to stop this extremist behavior on the streets of Portland. Self immolation by the animal “rights” kooks is not free speech. If you won’t keep these kooks in line then get them for smoking within 25 feet of the door of a business. They were willing to send a man inside a business to burn up actual human beings to make their “point.”

This is what their crew says on their website tonight:

“Shaull is not the first to give his life in the U.S. animal liberation struggle. This is a time to remember William Rodgers, who took his life in an Arizona jail in 2005 while being held for numerous Animal Liberation Front actions. It is also a time to remember Alex Slack, who took his life while awaiting trial for the  A.L.F. bombing of the Utah Fur Breeder’s Agricultural Cooperative in 1999.” 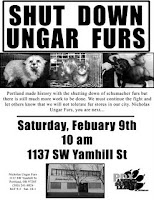 They claim not to know him. But they sure as all get out claim him on Twitter from their “voice of the voiceless” twitter feed:

But I’ll sure bet they egged him on so they could put another legal business on the ropes.
Just another day in the City of Portland.
Mr. Shaull, I’m so sorry for your loss. We can’t always control our children–especially our adult children–as much as we’d like to. But your son was encouraged to kill himself by the crazies allowed to demonize the streets and legal businesses of Portland. I am praying for your family. Complaints should be sent to: Randy Leonard and Sam Adams 1221 SW 4th Avenue, Portland, Oregon