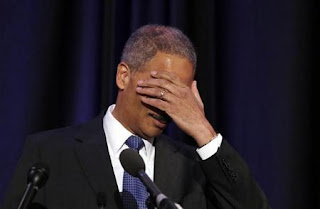 Washington (CNN) — The House of Representatives voted Thursday to hold Attorney General Eric Holder in criminal contempt for refusing to turn over documents tied to the botched Fast and Furious gun-running sting — a discredited operation that has become a sharp point of contention between Democrats and Republicans in Washington.
The 255-67 vote marked the first time in American history that the head of the Justice Department has been held in contempt by Congress. Almost every House Republican backed the measure, along with 17 Democrats.
A large number of Democrats — including members of the Congressional Black Caucus and House Minority Leader Nancy Pelosi — walked off the House floor in protest and refused to participate in the vote. Speaking in New Orleans immediately after the vote, Holder dismissed it as “the regrettable culmination of what became a misguided — and politically motivated — investigation during an election year.”
Tell ’em where you saw it. Http://www.victoriataft.com