Are the 2000’s the warmest decade ever, ever in the Pacific Northwest or…the higher temperatures due to the placement of the temperature monitor at the third runway of SeaTac Airport? This picture might tell the story. See it below. 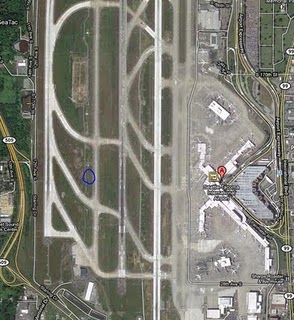 From A Believer in the Church of Global Warming (here). Cliff Mass also says,

Now I did quite a lot of research to determine whether there were any temperature sensor changes recently (position, type, etc) at the airport and have reached lots of assistance from the folks at Sea Tac Airport and the National Weather Service.  Based on their help, and the documentation available from the National Climatic Data Center, I think we can say, quite authoritatively, that the temperature sensor has has not been moved since 2002 ( it had been shifted a bit then in consideration of the third-runway construction, and there had been major moves/sensor changes in previous years).
OK, now lets answer the question.  Did the runway change the summer climate at the airport?  My colleague, Mark Albright, calculated the difference in summer temperatures (June, July, August) between Sea-Tac and an average of four nearby official reporting locations (Olympia, McMillan Reservoir near Tacoma, Kent, and Buckley).

Bottom line:  It really looks that the third runway has significantly warmed summer temperatures at the airport.  Thus, one must be really careful in assuming that any warming there is the result of some kind of greenhouse gas influence.