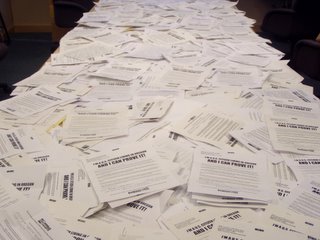 GO TO KPAM.COM, VICTORIA’S PAGE FOR YOUR COPY OF THE LETTER! OR CUT AND PASTE THIS ONE!
Dear Governor Kulongoski and Secretary of State Bradbury,
I’d like you to check if persons applying for state benefits, driver’s licenses, and voting privileges are American citizens and legal residents of Oregon. In short, you should make people requesting these benefits to PROVE IT.
It seems like such a reasonable request, yet, it doesn’t this doesn’t happen to my satisfaction in the state of Oregon.
· Mr. Bradbury has said recently that asking for proof of citizenship would deter voter participation. He’s absolutely right. It would deter people who are not legal citizens from voting. We shouldn’t have to point out to you that this is how it should be.
· At a time when the Department of Human Services is $172 million in the hole five months into their current fiscal year budget, giving away benefits to people who are non citizens makes no sense and is an insult to taxpayers who expect their dollars to go to needy Oregon citizens!
· In the case of Oregon driver’s licenses, we’ve seen the mockery that is the system of identification at the DMV in the recent Hillsboro case in which 80,000 people, most illegal aliens, with PHONY ID received driver’s licenses.
Sirs, let’s be clear here: this isn’t about anti immigration, as some in the media and in activist groups would frame it; this is about being opposed to giving benefits and services to ILLEGAL immigrants. ILLEGAL.
In a post 9/11 world, in a time at which government officials tell us important state programs go wanting for tax dollars, we demand you immediately order state government workers to require people who want to fully participate in these activities PROVE they’re citizens.
It’s outrageous that we even have to ask.