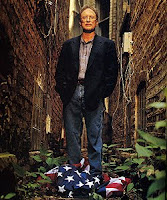 Domestic Terrorist linked to Barack Obama, William Ayers was scheduled to deliver a speech at the University of Wyoming Monday on Social Justice Issues and Education, but it has been cancelled by University Officals.

UW President Tom Buchanan in agreeing to the decision to rescind the invitation said, “The University of Wyoming is one of the few institutions remaining in today’s environment that garner the confidence of the public. The visit by Professor Ayers would have adversely impacted that reputation.”

Ayers was a co-founder of Weather Underground, a radical 70’s group who felt bombings were the answer to violence. Besides the Domestic Terrorism he engaged in he is most noted for his quote issued on September 11, 2001 in the New York Times, “I don’t regret setting bombs. I feel we didn’t do enough.”

Jim Kearns, UW spokesman said the college had received “about 430 e-mails and phone calls since last Friday, with the overwhelming majority against Ayers appearance.”

Franciso Rios, director of the Social Justice Research Center decided to cancel Ayers appearance and apologized to the University Community for any harm that may have come of it.

Now, what’s that wise old saying? What goes around comes around?