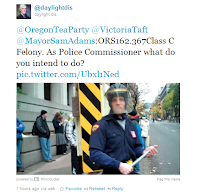 When you can’t actually talk trash about the Portland Police Bureau cops just make it up! That appears to be the situation outside the Justice Center yesterday.
Citizen Journalist Daylight Disinfectant captured the cretin on video.
What’s that in your hand, Officer?

Dateline Portland Oregon- November 29, 2011 – A videographer approaches the “peaceful protest” being conducted by Occupy Portland in front of The Justice Building in downtown Portland. An Occupier dressed in a mock police uniform and carrying a TASER replica identifies himself

Video and more after the jump:

as a Portland Police Officer and slaps his night stick into his hand menacingly. “Keep it moving!” he orders the videographer. A short time later a man in a bandana is arrested for trespassing in front of The Mark O. Hatfield United States Courthouse which some of the Occupiers used as a protest site. “We’re going to Burn This Town!” he tells the Federal Marshalls. A police officer informed us that the man arrested was known to them and had probably been a former resident of the Occupy Portland Camp. An officer thanks us for filming the event.
>>
>> § 162.367¹
>> Criminal impersonation of peace officer
>> (1) A person commits the crime of criminal impersonation of a peace officer if the person, with the intent to obtain a benefit or to injure or defraud another person, uses false law enforcement identification or wears a law enforcement uniform to give the impression that the person is a peace officer and does an act in that assumed character.
>> (2) Criminal impersonation of a peace officer is a Class C felony.