Former House Speaker Dave Hunt is getting into the race for chair for Clackamas County Commission. He’ll officially make his announcement on my show today on KPAM. The Gladstone Democrat was drummed out of his House leadership position because of his hyperpartisanship and inability to play well with others.

Hunt cut his teeth working on the Hill for Reps Louise Slaughter, Brian Baird and Darlene Hooley. He’s been elected to five terms in the Oregon house rising to speaker in 2009.

Hunt began to lose favor with his own party after using his speaker’s PAC to fund what I call “Liar Flyers” about Republicans in key house races. Hunt claimed the Republican candidates were in favor of a 30% sales tax, a claim Hunt made up out of thin air.

All the candidates Hunt targeted with his “Liar Flyers” won their races. See posts here, here, and here.

Should Hunt be elected to Clackamas County Chair he’ll have to contend with a large contingent of fiscally conservative activists in Clackamas County with whom he’s crossed swords before. It was AFP Clackamas that rallied around one of the targets of Hunt’s flyers, Patrick Sheehan.

In his attacks on candidates during the 2010 election, Hunt attempted to demonize Americans for Prosperity’s Clackamas County group. 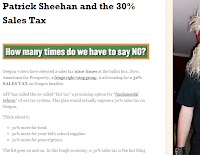 Hunt is the former head of the American Baptist Churches USA.