Thanks to an alert 5th Listener who directed me to this Newsbusters story, I learn that Adbusters, the Canadian magazine that launched the “Occupy” movement, declares their movement is now “burned out” and “out of ideas.” 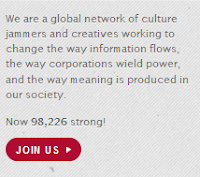 For people who consider themselves at the cutting edge of “culture jamm[ing].” they’re certainly slow learners. Anyone with a pulse could have told you Occupy was “out of ideas” when they first appeared on the scene.

Occupiers pitched tents and commenced presenting a sushi-go-round-like buffet of warmed over liberal ideas. Free housing, free university education, steal from the rich and give to the poor, and,

oh by the way, if you don’t do what we say we’ll sic our pet anarchists on you and pee on your sidewalks. They were po’d at Wall Street, main street, cops, citizens, conservatives, suits and park toilets. The only ones they didn’t hold a grudge against were their union paymasters.

The left wing magazine, Adbusters, says Occupiers have sold out:

Burned out, out of money, out of ideas… seduced by salaries, comfy offices, book deals, old lefty cash and minor celebrity status, some of the most prominent early heroes of our leaderless uprising are losing the edge that catalyzed last year’s one thousand encampments.

And after selling out they simply became corporate like:

Bit by bit, Occupy’s first generation is succumbing to an insidious institutionalization and ossification that could be fatal to our young spiritual insurrection unless we leap over it right now. Putting our movement back on track will take nothing short of a revolution within Occupy.

But amazingly after declaring their paradigm dead, Adbusters is calling for more of the same with a new name: Flash Encampments. 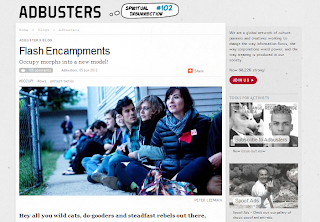 The next big bang to capture the world’s imagination could come not from a thousand encampments but from a hundred thousand ephemeral jams… a global cascade of flash encampments may well be what this hot Summer will look like.

Flash Encampments. Is that a plan or a prediction of how this will last?