Now they’ve gone and done it. As originally pointed out by the Zero yesterday, the illegally encamped Occupy Portlanders may have finally become of the authors of their own undoing.

After extorting the City and cops by threatening lawbreaking; after illegally marching in the street without a permit; after illegally camping at two parks, breaking city ordinances on camping in public parks and liability; after illegally blocking a street for a week inconveniencing thousands of motorists and –gasp!–bicyclists; they’ve finally gone over the line. And maybe, just maybe, the city will actually boot these ne’er do wells out of the bushes.

They’ve hacked off the Parks Commissioner by trampling on trees, but worse? They’ve planted ILLEGAL WEED on park land. 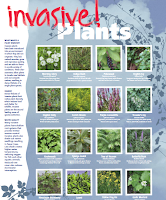 No not THAT kind of illegal weed, dummy. It’s an open air pot market out there at Occupy Portland, for crying out loud. The City won’t do anything about THAT. No, this illegal weed is: an Invasive species!

The City of Portland is a sanctuary city for illegal aliens, spending hundreds of thousands of tax payers’ dollars to find them illegal jobs. But plants are another situation altogether. The City of Portland has actually outlawed some plants. That WANTED poster over there tells SOME of story, but you have to dig a little deeper in the City books to find out that BAMBOO is VERBOTEN.

Play around with Portland’s preciousness and mock the unwritten (though recorded) credo that “Trees have rights,” and you’ve simply GONE. TOO. FAR.