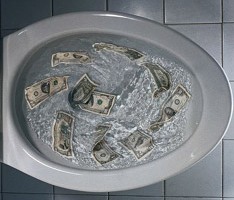 The Portland Tribune is reporting that City of Portland officials admit to hiding, stalling, stonewalling the turning over of documents in the lawsuit against the City Water Bureau.

What are they hiding?

What they did with our money.

“This shows how political and disingenuous the city’s approach to the water and sewer controversy has become,” says John DiLorenzo, one of the attorneys who filed the lawsuit. “The city owes it to its ratepayers to admit that it has made many non-mission expenditures, to take responsibility, and to then move forward.”

But the City is fighting handing over documents on Water Bureau expenditures because it smells of a ‘fishing expedition’ on the part of the group fighting on behalf of rate payers. On Monday the City and the attorneys who filed the lawsuit, including DiLorenzo, were in court. The Tribune (here) reports the City doesn’t want to comply with discovery requests for spending documents. Another hearing on the lawsuit over Water Bureau spending is set for today.

DiLorenzo alleges the Water Bureau misspent taxpayers’ money on, among other things:

As Senate Republican leader, Mitch McConnell, tweeted out this morning:
@McConnellPress: McConnell: “if disclosure is forced upon some but not all, it’s not an act of good government, it’s a political weapon”