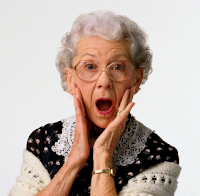 Do you really think that the man who authored a 35% increase in spending and entitlement programs, blew up the Welfare Reform Act of 1996 in the stimulus bill (THUS HUGELY EXPANDING WELFARE AND FOOD STAMP GIVEAWAYS) and gave billions to corporate cronies now isn’t going to pay Grandma her Social Security check? If you do, here are the smelling salts. Get a whiff? Good. NOW SNAP OUT OF IT!


Days after the President and Democrats began deploying the meme that if the August 2nd debt ceiling “deadline” passed without a deal the United States would essentially declare bankruptcy and fiscal armegeddon would commence, the President went nuclear (please alert the mixed metaphor police).
Yesterday President Obama declared that unless Republicans did what he wanted and increase taxes,  Grandma would ‘get it’ right in her social security check.
Here’s what the President told CBS:

I cannot guarantee that those checks go out on August 3rd if we haven’t resolved this issue. Because there may simply not be the money in the coffers to do it.

He knows that’s a big whopper, but why let facts get in the way of re-election? The President wanted to demagogue the “revenue enhancement” issue knowing that if the R’s go along it will be their 2012 “read my lips, no new taxes” moment and they’d LOSE in 2012. This guy’s been spending like Kim Kardashian on a weekend bender in Vegas and he thinks people will actually believe he’s the adult in the room on this?
Mere hours after the President went nuclear, Republicans, lead by Senator Mitch McConnell, called the President on his bluff. They said: it’s up to you, Mr. President. If we can’t come to an accommodation on spending cuts  by the deadline you’ll have to make the decision all by yourself.

Senate Minority Leader Mitch McConnell (R-Ky.) on Tuesday laid out a plan to avoid a national default and put responsibility for increasing the debt limit squarely on President Obama. Under the legislation, Congress could only block Obama’s requests by passing resolutions of disapproval, which would have to be supported by two-thirds of both the Senate and House to overcome an expected presidential veto.

Interesting, no, that the man who pretends not to want to rock ‘the street’ and the IMF by not paying our bills is willing to tell Gramps and MaMaw that he’ll jack their checks.

This is your moment, Mr. President. Make a decision. Lead. Your finger is on the button. MaMaw is waiting.