Portland Police Chief Mike Reese recently said he’ll ask the community when police should use Tasers. This comes after criticism of law enforcement and a recent 9th Circuit Court decision holding officers personally liable if they ‘Taser’ someone when the suspect poses no immediate threat.
Community Input May Back Fire
In the past law enforcement discounted the need to gain community acceptance of law enforcement operational tactics.  When it came to patrol technique, criminal investigation, arresting folks and choosing police weapons, no input from ‘the community’ was sought or needed. The police knew best and community concerns were not much of a factor. There are legitimate reasons for police to rely on their internal expertise when creating policies and choosing weapons. This effort to get community input might create a path for community interference.
Interference will raise the ire of some. A better phrase might be create confusion.  That is exactly what will be created with the Portland Police Command decision to take their Taser policy to the public arena. I can guarantee you that before this process is done there will be less–not more–understanding and acceptance in the community of the Taser.  The crowd that never trusts police to do anything in the public interest will use this process as forum to misrepresent use of the Taser. Our citizens will be wondering why they are being asked in the first place.

Worse, it will likely freeze the street cops from using the Taser appropriately. The Taser is a revolutionary tool that has saved lives and prevented injuries. It reduces physical contact with suspects. And changing the policy means we’re likely to see use-of-force complaints increase dramatically.

Fantasy Land Versus the Street
The potential effectiveness of this tool will be voided by the confusion created in bureau policy and the cops’ need to be safe.  Yet they will now need to worry that somehow the use of the Taser will get them in trouble. In trouble when it is deployed outside of an artificially created community expectation and that perceived expectation bangs up against the realities of the street.
Backstory on Tasers
But let’s examine why Tasers originally came on the scene in this country. The purpose of the Taser was first to minimize injuries to those who wouldn’t ‘come quietly.’ An equally valuable benefit was that it was a tool to keep officers from getting hurt. The Taser helped prevent police officers from tangling with suspects hand-to-hand or using their baton.

Like any new tool the police the potential for improper or even abusive use is always a possibility. Effective training and policy development, review and assessment and discipline as necessary is the most effective for controlling such behavior.  What is not effective is to provide the tool and the training then confuse and freeze the cops from properly using it.

Here is an example.  A couple of year ago a Portland Police Officer Tased a homeless person who was taking video of the officer. The officer ordered the man to stop taking video. To make a long story short, the City of Portland paid a $50,000.00 settlement.  This is not a failure of the Taser it is a failure in judgment of the individual officer.

Not a good story.  But I can confidently assert that neither the policy or the training changed at the time and has not been addressed until now. Why now? It is fairly obvious; it’s because of the incidents where the Taser deployment reportedly failed and police officers resorted to deadly physical force.

Don’t Tase Me, Bro
Sure, policy and training adjustments after individual incident review and assessment are a must, but asking the public when they would  like to be “Tased” accomplishes nothing. In fact it can leave things worse bygiving the impression there can be a strictly defined list of when a Taser will be used by their police officers. There can be no such list.

There are only three options,

And then what about the cops? Again there are only three options: 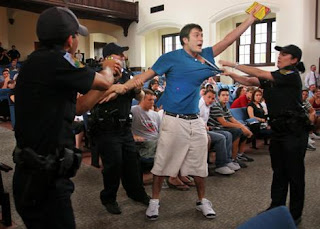 And remember the only tool left on the use of force continuum is the officer’s firearm.

I can tell you from personal experience at the end of a Taser prong that it’s a once-in-a lifetime-experience and one you’ll want to miss.  Every muscle in your body gets involved and ones closest to the prongs bring an instant understanding of its purpose and respect for its use.

But I can recount several instances in the Multnomah County Sheriff’s Office on the street, in the jails and in the courthouse where the presence of the Taser not only prevented the use of a firearm, or injuries from a fight, in some cases it prevented the fight all together.

There is absolutely nothing wrong with engaging our citizens in an education process about why we use the tactics and tools that we do. In fact that is good stuff. But along the way if we allow principled policy to be replaced by unworkable policy then law enforcement fails everyone.

We are a great risk of putting our police officers in not only no-win situations, but lose-lose situations. Time after time, event after event they are faced with bureaucratic inferences that somehow they are failing to meet our expectations. The Police Bureau can’t set the expectation that every poor decision a cop makes can be solved with another public flogging.

Leading With Confidence
Connecting with our citizens is different than pandering to them. We have the good fortune in this country that our citizens still believe the police are professionals with integrity that they trust to make decisions that protect and serve them.  When they want our attention that should have it. When they want us to lead by making solid public safety decisions we should lead with confidence.

So lets get the Taser policy right. Let’s not take the a life saving and injury preventing tool and its appropriate discretionary use away from its proper place on the street.

And lets not have citizens create a list they can’t live with and police officers can’t live by.  Because I just realized there is another option the cops have in their arsenal of tools and discretion. They can just let the bad guy go. It would probably be less trouble, don’t you think?