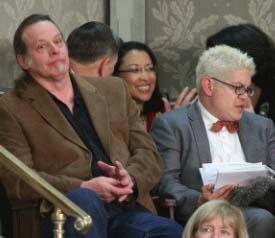 repblumenauer Earl Blumenauer 2h
Sorry my friend, constituent and guest for SOTU Thomas Lauderdale had to sit next to Ted Nugent. pic.twitter.com/RqC8UWCG

But who was classier tonight? 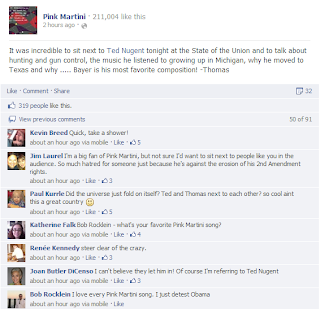 “The new comic book series showcases class struggle, a few alien interlopers and populist protagonists, described as “the super-powered disenfranchised, now the voice of the people!”It’s a book about power. Who owns it, who uses it, who suffers from its abuse,” writer Gail Simone tells Wired magazine. “As we increasingly move to an age where information is currency, you get these situations

where a single viral video can cost a previously unassailable corporation billions, or can upset the power balance of entire governments.” 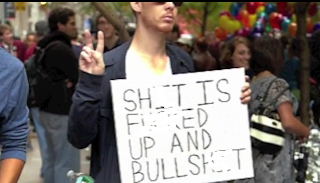 So it seems to me that we should help DC Comics with some of the characters for this new Super Hero squad. I suggest that in addition to the Green Lantern, Batman, Wonder Woman, Swamp Thing, Superman and Flash, DC should consider this possibility from right out of Occupy Portland. Eric comes right out of the chute with: ENTITLEMAN.

Entitleman wears green to commemorate his environmental street cred, his chest is emblazoned with a big 0 because he stands for nothing and offers nothing. He typically carries an ipod, ipad, or an iPhone to demonstrate his aversion to capitalism, wears Dr. Dre headphones to drown out drum circles and carries this sign because it means nothing at all. Oh, and he carries a bag because he thinks you owe him something.

The America disdaining, God diminishing Congressman from the People’s Republic of King County Washington has no good answer to Jason Mattera when he asks the socialized medicine loving Mc Dermott, “Where’s our premium reduction we were promised?”
Tell ’em where you saw it. Http://www.victoriataft.com