Thanks Pat Dollard. I was thinking of doing more show prep but you talked me into looking at this video.

here are some other questions the smirkury asked Smith

Q: Did you ever hurt anyone behind the wheel?
A: No. Luckily, I have never been the driver in an accident.

Q: From 2004-2008 you show no tickets. Why no tickets then?
A: For the first portion of that time, my license was suspended, and I didn’t drive. For 2 years after that I kept a clean record, in part because I was not driving much during that time.

Q: From 1996-2002 you also show no tickets. Why not?
A: I was at law school until 1999 and lived away some during the time after. During this time I don’t believe I had any moving violations in other states.

Q: Did you knowingly fail to carry insurance? Did you knowingly drive with a suspended license?
A: My memory on this stuff isn’t perfect. As for proof of insurance, my best guess is that it had lapsed, and I am more than willing to concede that. I wasn’t dealing with important personal stuff. I did not knowingly drive with a suspended license, but I found out after the fact that I had. I should have been more on top of this.

Q: Why didn’t you yield to an emergency vehicle? What kind of emergency vehicle was it?
A: I didn’t see the flashing lights as an officer was pulling me over. When I realized, I was mortified. The officer pulled me over, and I got the ticket. I did not contest it.

Q: Why did you wait to get your license reinstated back in 2004?
A: I don’t remember the duration of the suspension. I do remember that I could not afford insurance for a while — and I was not eager to drive. (I was killing myself trying to build an organization. I wasn’t taking a salary, and I didn’t have money for tickets or insurance…or even rent, as I was essentially couch surfing. It was a time I had lost balance.) Moving forward, the Bus Project was growing and professionalizing, I had gotten together with Katy, and I was trying to find a bit more balance. By 2006, I got insurance and got my license reinstated.

Q: Why didn’t you learn your lesson?
A: I blew it.

Q: Did you think about this before you decided to run?
A: Yes, and it gave me some pause. I knew it would be a problem, and I knew that critics might well use it and beat me up with it. But I watched the race and didn’t trust the discussion about issues I cared about most – the poverty and blight in my neighborhood in East Portland and in neighborhoods across the city, an economic development plan beyond tax breaks or boondoggles, infrastructure worthy of our values and this century, the need for better steps toward equity in our city, innovation of public systems, and a reinvigoration of Portland’s civic spirit. And so, warts intact, I decided to run for mayor.

Q: Why didn’t you pay your fines in a timely fashion or defend yourself an hearings? Why wasn’t your insurance current?
A: My insurance is current and I have paid my fines. In 2002-2004, part of my challenge was that I didn’t have money. I avoided them, thinking I could address the consequences later. As for insurance, I didn’t pay it on time because I didn’t know about them – I should be better at opening my mail. It is a big part of the embarrassing blind spot.

Q: How do you think this relates to your ability to be the mayor?
A: People have blind spots and things they’re bad at. Myself very much included. Sometimes more so. This is something I’m bad at. I’m good at focusing on objectives and building teams to achieve them. It is important for me to build teams — to identify, recruit, and develop leaders. I wouldn’t hire myself to be my administrative assistant; I would hire myself to lead something I cared about.

There have been a few who would like to paint me as a caricature and neglect meaningful elements of my story. I was elected and re-elected to the State House and elected by my colleagues to leadership in the House. I was one of just two House members on Governor Kitzhaber’s steering committee. I was named the 2011 Small Business Champion and the 2012 Webvisionary. I clerked for the 9th Circuit Court of Appeals. I led the start of a nonprofit that won national recognition and launched affiliates in other states and other countries. We are building a campaign that is making Portland history for grassroots engagement. In each of these roles I made mistakes. But in each role we ultimately found meaningful success.

I have tried to be open about my weaknesses. I focus a lot on doing the job I’m doing, and at times I have done a pretty bad job at taking care of myself. I also have strengths, and I think those strengths (including an occasional willingness to recognize my weaknesses and an ability to keep a cool head in the face of criticism) will make me a good mayor for our city. And ultimately, I hope this race will be not about the past — and not about me — but about the future of our city.

Q: Why didn’t you talk in greater detail earlier?
A: When asked, I’ve answered questions to the best of my memory, which also isn’t perfect. Nothing about my driving record has changed since the election began. It’s available public record. I have talked about it on T.V., on the radio, and with newspapers many months ago. A blogging critic paid for a background check on me nine months ago and published the driving record contents. I’ve done at least one online interview on my driving record. When a newspaper asked me to release the record, I did. I was in the car (passenger seat!) when I spoke recently with a reporter, without my driving record in front of me. Looking at it now informs my memory (and renews my embarrassment), although it doesn’t perfect my memory. I’ve spoken to another reporter since and done another radio interview. This has been covered pretty thoroughly.

Q: Why do this Q & A?
A: I wanted to respond to all these questions here, because I have had the one vacation of the entire campaign scheduled with my wife for a long time. It would be ironic if discussion about keeping proper balance in my life led me to avoid one measure of family balance in this campaign season. I want to answer key questions before we leave. We were supposed to leave earlier, but wanted to address this stuff. Katy has put up with enough not to have me pull our thin vacation rug out from under entirely.

Q: What impact does this have on the race?
A: Ultimately this race will be up to the voters of Portland. Pundits predicted that I would come in a distant third in the primary. I had discussed mistakes, and newspapers endorsing other candidates discussed them quite a bit. We have already known that our campaign is not the choice of some powerful people, and I suspect I won’t be successful in changing all those minds. We will continue to do what we have been doing — trying to build an unmatched connection to the city, including historic number of engagements — house parties, knocking on doors, individual contributors and supporters, and more. Anytime you get into a political campaign, there’s a chance you’ll lose. Whatever the result, I hope our conversation will be less about the past and more about the future of the city.

Q: What are some of the best heckles you’ve heard so far?
A: “Did you get a ride?” (that was from the publisher of the Oregonian. Thanks.) “Want a ride?” (from multiple) “If you lose the election, want to be my partner in our combo accounting-taxi service?” “You should invite ____ to carpool to a basketball game.” Okay, that’s enough of that.

In an email calling out the trash talking by the lib media (but I repeat myself), Paul Ryan has made a fund raising pitch based on some of the more wild stories about him. 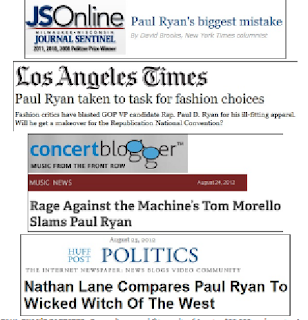 At first I was puzzled why Ryan would include that Oregonlive headline in a series of stories that included an LA Times chestnut, “Paul Ryan Taken to Task for Fashion Choices” and a KaPOW by HuffPo, “Nathan Lane Compares Ryan to the Wicked Witch of the West,”  but then I read the Joe Conason revisionist history piece and realized that Ryan–and indeed any sentient being–considers it as insipid as the others.

If you’d like to see Paul Ryan’s real foreign policy thought, check out this Hugh Hewitt show with Michael Barone or this piece on it. Just because the libs haven’t paid attention to Ryan’s foreign policy experience up till now doesn’t mean Ryan has a deficit in that department. Ryan has more street cred on foreign policy than Obama did and does.