This is reprinted by permission by Victor Sharpe and was published originally at Renew America.  Victor is heard on the Victoria Taft Show every Tuesday at 2:16pm.
The increasing number of missiles deliberately fired from Gaza at southern Israel’s farms, villages and towns is a clear indictment of the Hamas terror machine that rules and occupies the Gaza Strip. It represents a catalog of Arab and Muslim war crimes.

There has been a 30% increase from the same period last year in the number of lethal rockets slamming into Israeli civilian homes with all the horror and misery that is inflicted upon the civilian population, particularly upon the little children who live in constant fear of when the next rocket will strike — usually with a mere 15 seconds warning.

In one day alone — June 21, 2012 — thirty one Hamas and Islamic Jihad missiles fell on Israel causing damage and trauma. But you probably read nothing about it in your local daily newspaper or saw or heard it mentioned on the TV.

Since Israel unilaterally left Gaza, as an unheard of peace gesture in 2005, her hope that the Arabs in Gaza would create a society based upon rational considerations, such as building hospitals, schools, or creating the infrastructure for a normal society at peace with its neighbor, has been shattered.

It was a pipe dream from the start and since 2005, when Israel’s then Prime Minister, Ariel Sharon, ordered what became known as the “Disengagement,” — a euphemism for wrecking the lives of so many of his own people — over 12,000 deadly Arab missiles have slammed into southern Israel’s civilian areas.

Ten thousand Israeli men, women and children were forcibly evicted by Israeli police under the so-called disengagement from their Gaza Strip farms and villages in order to prove Israel’s peaceful intentions: those Jewish civilians are mostly now still living as refugees within the Jewish state.

This is an indictment of the idiotic belief that still afflicts too many Israeli leaders, mostly those on the Left, despite overwhelming evidence to the contrary, that the Arab and Muslim world will accept a non-Muslim state in land once conquered by Muslims in the name of Allah — even though Jewish patrimony in its ancestral and biblical homeland predates Islam by millennia.

What still evades the minds of too many Israeli and world leaders is the reality that in Islamic belief, wherever the Muslim foot has trod triumphal, that land forever is part of the Dar al-Islam (the House of Islam) and should it be lost, it then it becomes the Dar al-Harb (the House of War) and it is a religious injunction upon all Muslims to wage ceaseless war until it is recovered. Like the pernicious intrusion into Europe and Great Britain of Islamic Sharia law, the 21st century West is asleep and seemingly incapable of understanding that a 7th century religious war is upon it and winning.

Meanwhile, with Egypt lurching ever more into the clutches of the Muslim Brotherhood — thanks in large part to the foreign policies of President Obama — and the 40 or so year old peace treaty between Egypt and Israel practically torn in shreds by Egyptians, the Sinai Peninsula bordering Israel is aflame with increasing anti-Israel terror attacks now occurring along the entire length of the Israel-Egyptian border.

Remember, Israel gave away every last centimeter of the Sinai — a wonderful buffer zone between Egypt and the Jewish state. This territory consists of 97% of the so-called occupied territory Israel gave away in return for a peace treaty written on a piece of paper. Now Israel’s eastern neighbor, Jordan, is in grave danger of also succumbing to fanatical Islamist and jihadist control.

According to Khaled Abu Toameh, writing in the Jerusalem Post, “Jordanian government officials say there are growing signs that the kingdom’s powerful Muslim Brotherhood organization has plans to overthrow the regime.

“Today, most of the anti-regime demonstrations throughout the kingdom are being initiated and led by Muslim Brotherhood supporters whose goal is to turn Jordan into an Islamic republic.

“Many Arabs feel that President Barack Obama’s endorsement of the Muslim Brotherhood has emboldened the Islamists and increased their appetite to drive moderate and secular rulers out of the Arab world.”

Incidentally, a complaint to the BBC about why the media giant — which exists through British taxpayer money — always displays a permanent bias against Israel and never reports on Arab aggression against it, elicited the outrageous response from a BBC spokesperson, as follows:

“… It is the policy of the BBC only to report on Palestinian attacks against Israel when Israel retaliates.” Shameful.

Meanwhile Israeli aircraft hitting the Hamas and Islamic Jihad missile gangs, but only after they have either fired their missiles or it appears that they are on the verge of launching a lethal rocket attack, does nothing for the one million hapless residents of southern Israel whose lives are made permanently miserable by the evil that is launched against them from the Gaza Strip.

We are witnessing Arab and Muslim war crimes on a never ending spiral of horror inflicted upon Israel’s civilian population and the world yawns.

Only when the Jewish state is provoked beyond endurance and — as all nations have a right to do — defends itself and resists Palestinian barbarism, aggression and cold blooded terror — does the world awake.

Predictably the 57 Arab and Muslim states then rush to the terminally corrupt United Nations, which gleefully condemns not the Arab perpetrators and victimizers, but Israel, the perennial victim.

Such a sick world should hearken to the biblical injunction in Genesis 12:3. It ignores it at its peril.

Victor Sharpe is a prolific freelance writer and author of several books including the highly acclaimed trilogy, Politicide: The attempted murder of the Jewish state.

Portland’s Catholic Archdiocese has joined a national campaign to fight back against ObamaCare’s anti religious freedom mandates. The US Council of Bishops has begun an event called, Fortnight for Freedom. It started last Thursday and lasts until July 4th, American Independence Day. 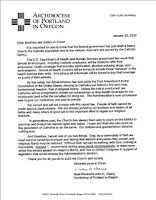 The Portland Archdiocese has been particularly subdued since the Health and Human Service’s ObamaCare mandates became front page news. Last January, western Oregon Archbishop Vlazny was among many leaders who wrote a urging Catholics to get in the fight against the ObamaCare policies which forced Catholic institutions to provide coverage for abortion drugs, birth control and offer services ending pregnancies. At the time, Archbishop Vlazny said, “We can not and will not comply with this unjust law.” See the letter nearby. 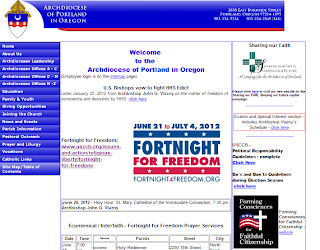 While parish priests from other diocese across the country read their respective letters from their pulpits or handed parishioners the letter, reports from parishes in Portland showed a much more subdued treatment. The letter, I was told, was put in some cases in the backs of sanctuaries or maybe stuffed in a weekly bulletin. In fact, not only did the Archdiocese not want to give me a copy of the letter they didn’t want to TALK about it at all.

That’s all changed. The Archdiocese’s webpage now features the Fortnight for Freedom prominently on its front page. Before, you couldn’t get a look at the Archbishop’s letter.

Before I couldn’t get the spokesman from the Archdiocese to come on the program and tell me what was going on, but on Friday’s show spokesman Bud Bunce was quite gracious–and vehement–about the stakes involved in getting rid of these mandates. Hear my interview here at 1:16 on Friday.

Bunce said this is the first time he can remember when the Portland Archdiocese has involved itself in a political fight like this. On the other hand, it’s never had to fight for a purpose that so clearly breaks faith with the First Amendment.

Listen to the short interview. And then pray that the US Supreme Court overturns this ghastly unconstitutional monstrosity this week.

This never happens in Portland.
Moderately edited.  Try to guess.  Look for anything at least minimally outrageous.
OMG!  Nordstrom’s?

Black mob violence has taken on a new note in Portland, Ore. It’s not the unsuspecting passersby or the corner convenience store that’s the target here.

Just weeks ago, a group of 10-15 hoodie-wearing blacks allegedly stole clothing and raced out of the store. Their actions were captured on video.   [http://www.youtube.com/watch?v=i604Bs4GoM4&feature=related]

And a gas station: http://www.youtube.com/watch?feature=endscreen&NR=1&v=RYT18NOECqA

The following night, a group of 20 to 30 black people, came upon three people on a tennis courts at the park: “Some of the teens began throwing bottles onto the court and calling out to them. They said the teens then began fighting with them.”

Luckily this this wasn’t white on black crime, or else we’d never hear the end of it.

But, all this would be unnecessary if they had only followed the guidelines on not mentioning the colors of the offending parties.  When will they learn?