by Bruce McCain for www.VictoriaTaft.com 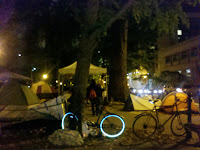 On Monday, October 17, 2011 Portland City Commissioner Nick Fish issued an “open letter” to the Occupy Portland members who have been unlawfully occupying Chapman and Lownsdale Squares now for its second week. 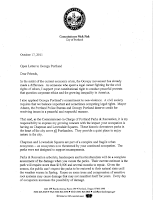 Commissioner Fish wrote his letter in his capacity as Commissioner-in-Charge of Portland Parks & Recreation. In his letter Fish generally expresses his support for the Occupy movement, but he correctly notes that the unlawful occupation of those downtown parks has already caused more than $19,000 in damage which will require “several months to repair.” Fish also correctly states that “ropes on some trees and compression of sensitive root systems may cause damage that may not manifest itself for years. Every day of occupation increases the possibility of damage.”
Commissioner Fish concludes his letter by noting that the costs of repairs to damage caused by the Occupy Portland group will be borne by Portland taxpayers – “the very people Occupy Portland is attempting to engage and represent.” Once again, Fish is correct that Portland taxpayers will pick up the tab for all the damages caused by the Occupiers. But Fish carefully omits any reference to his own duplicity and complicity in this matter.
While most critics of the Occupation point to the ongoing violation of the city’s anti-camping ordinance, no one has noticed that the unlawful occupation of Chapman and Lownsdale Squares also violates several sections of the city code directly under Fish’s control and responsibility. The city’s anti-camping ordinance is found at §14A.50.020. The ordinance is considered a public order offense and is not the direct responsibility of any particular commissioner to enforce. The anti-camping ordinance has also been the subject of an ongoing federal lawsuit challenging its constitutionality.
However, Title 20 of the city code governs Parks & Recreation and falls under the purview of Commissioner Fish. Specifically, Chapter 20.08 governs the use of city parks and the requirement to obtain a permit to use the parks if certain thresholds are met. For example, under §20.08.010 a permit is required to use a park if the activity is involves at any one time 150 or more persons. Occupy Portland meets that threshold with between 200 and 400 illegal occupants in the squares at any time.
Likewise a permit is required if the activity includes the placement of any temporary or permanent structure, including but not limited to any table, bench, stage, fence, tent or other facility; or if the activity requires, or is reasonably likely to require, increased police or fire protection;  the turning on or off of water; provision of utilities, such as gas, electricity or sewer. Once again, Occupy Portland clears that threshold for requiring a permit.
Why is the need for a permit important to city taxpayers? Because of §20.08.040, which requires the permit holder to indemnify the city against all damages incurred from the permitted use. Specifically, the city code provides:
“All permits issued under this Chapter shall be subject to the City ordinances and the rules and regulations of the Parks. The persons to whom such permits are issued shall be bound by said rules, regulations, and ordinances as fully as though the same were inserted in such permits. Any person or persons to whom such permits shall be issued shall be liable for any loss, damage, or injury sustained by any person whatever by reason of the negligence of the person or persons to whom such permit shall be issued, as well as for any breach of such rules, regulations, and ordinances, to the person or persons so suffering damages or injury, and shall indemnify, defend and hold harmless the City and its officers, employees and agents from any and all claims, demands, actions and suits (including all attorney fees and costs, through trial and on appeal) arising from the permittee’s use of the Park under the permit.”
In layman’s terms, this critical code provision makes the permit holder pay for the very damages Commissioner Fish now says must be borne by city taxpayers because his office chose not to require Occupy Portland to apply for and obtain the required permit to use those city parks in accordance with city code and regulations.
By most accounts, the Occupiers have already violated several code sections relating to the use of public parks, including: §20.12.060 Prohibited Conduct Relating to Permits; §20.12.070 Unlawful Use of Trees, Monuments, Vases, Fountains, Railings, Fences or Tables; §20.12.080 Structures in Parks; §20.12.100 Vandalism; Protection of Park Property and Vegetation; §20.12.140 Animals; and similar provisions of Chapter 20.12. All of these issues are Commissioner Nick Fish’s responsibility to address. But his only response so far is an “open letter” referencing Freedom Riders of the 1960’s and a plea “to work with Parks & Recreation professionals to make changes that will minimize the damage to the parks.”
Under Portland’s commission form of government, Commissioner Fish does not need permission from the mayor or the council to enforce Title 20. Fish could have and should have required Occupy Portland to obtain the required permit, including the requirement to indemnify the city for any damages caused. Fish had and has this authority without resorting to the anti-camping ordinance.
Like his colleague, Mayor Sam Adams, Commissioner Fish has made the deliberate choice not to enforce the city code with respect to Occupy Portland. This conscious decision by another city commissioner is yet another potential precedent for future groups to occupy the same or different city parks without obtaining the required permit. Nick Fish should next issue an Open Letter to Portland Taxpayers explaining the reason they must pay for Occupy Portland’s unlawful actions is because he was unwilling to do his job as Commissioner-in-Charge of the Parks & Recreation Bureau.
Bruce McCain is a former Captain for the Multnomah County Sheriff’s Department, a television and radio commentator and is an Attorney in private practice in Portland.
Tell ’em where you saw it. Http://www.victoriataft.com