Watch the latest video at video.foxbusiness.com

That was back in April.

Do you think he feels differently today?

Maybe if he paid his taxes our deficit would be less.

It’s laughable, but so expected and predicted. The point is: The GOP could have stood firmer on cuts, caps and balanced budget –standing on principle–and still would have been blamed. The GOP should have held out for deep cuts that would have helped their country–not just the next news cycle and election.
Their compromise was blamed for yesterday’s market dip and today their compromise was blamed for the credit downgrade.
Stand up for what’s right and the public opinion polls, election results and the country’s economic future will take care of themselves.
Of course as you know the ratings companies were threatening a downgrade for weeks… 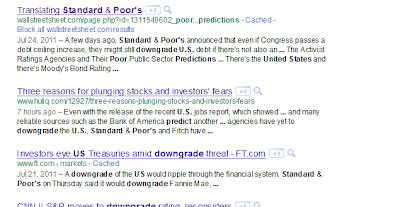 The credit agencies (the same ones which claimed CDO’s were AAA) said the US had to trim $4 Trillion off its books before they’d consider keeping the AAA rating. The #debtzilla deal did not do that. The Democrats wouldn’t let it and the Republicans let them get away with it. And today Voila! we have a downgrade.
Here’s ABC’s Jake Tapper with his telltale tweet this afternoon:

And if you went to the story you found this nugget:

Two government officials tell ABC News that the federal government is expecting and preparing for bond rating agency Standard & Poor’s to downgrade the rating of U.S. debt from its current AAA value.
Official reasons given, one official says, will be the political confusion surrounding the process of raising the debt ceiling, and lack of confidence that the political system will be able to agree to more deficit reduction. A source says Republicans saying that they refuse to accept any tax increases as part of a larger deal will be part of the reason cited. The official was unsure if the bond rating would be AA+ or AA.

AP via The Olympian

“The agency says that it is cutting the country’s top AAA rating by one notch to AA-plus. The credit agency said late Friday that it is making the move because the deficit-reduction plan passed by Congress on Tuesday did not go far enough to stabilize the country’s debt situation.”

“A source familiar with the discussions said that the Obama administration believes S&P’s analysis contained ‘deep and fundamental flaws’.”

As I recall, credit agencies were looking for at least $4 Trillion in deficit reduction. The sell-out deal we got was claimed to be only $3 Trillion.

And what of the actual debt?

I have to wonder just how much worse it will get before we can return some decent leadership to the nation? Even Jimmy Carter did not cause our credit rating to drop.