Angry Union Goon who needs a few lessons in history from a non-union history book.

Can anyone tell me just which union it was the founding fathers favored? 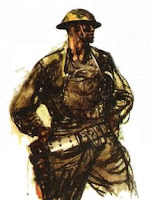 America recently lost her last surviving Veterans of World War One. Corporal Frank Buckles, who lied about his age to enlist in 1917, served as an Ambulance Driver in France, passed away Sunday, February 17, 2011. He was 110 years of age.

Rep. Shelley Moore Capito, a Republican from his district in West Virginia, co-sponsored a bill to authorize his body to lie in state in the Capitol Rotunda after his passing. An honor usually reserved for heads of state, the honor was to recognize the passing of an era, all of our Veterans of that long ago conflict now gone, and not Cpl. Buckles himself.

A fitting honor in recognition of all who sacrificed their youth, time and endured injuries from that Great War as well as all of those who lives were lost.

I find it completely unacceptable now that the leadership of both major political parties, Speaker of the House John Boehner (R-OH) and Senate Majority Leader Harry Reid (D-NV) are instead recommending a tribute to Buckles at Arlington National Cemetery.

Rep. Roscoe Bartlett (R. Md) wrote, “As the last surviving veteran of WWI, Mr. Frank Buckles is the last representative of an extraordinary generation of Americans who answered the call to serve, defend and preserve democracy in the world,” adding, “The honor to lie in the rotunda of the Capitol is not for an individual, but in recognition of extraordinary service to our country,” in a letter to Boehner and Reid requesting he be honored in the Capitol Rotunda.

Sens. Jay Rockefeller (D-WV) and Joe Manchin (D-WV) have joined in with the call to honor Buckles and are accusing Boehner of standing in the way of an effort to honor World War I veteran Frank Buckles at the U.S. Capitol.

Rockefeller has introduced a resolution to authorize Buckles to lie in “honor” in the Rotunda, but not in “state” as requested by House Veterans Affairs Committee Chairman Jeff Miller (R-FL).

President George W. Bush previously signed a waiver that would allow Buckles to be buried in Arlington Cemetery, his lower rank otherwise preventing such a burial.

Barack Obama said he and his wife Michelle “were inspired by the service and life story” adding “We join (Mr. Buckle’s daughter) Susannah and all those who knew and loved her father in celebrating a remarkable life that reminds us of the true meaning of patriotism and our obligations to each other as Americans.”

It deeply disappoints me to see both parties’ leaders reluctant to honor the passing of the World War One generation in our country and that such passing is denigrated to a political squabble.

Such honors are not requested for those of a party, but for the recognition of an entire generation of Veterans passing away with Mr. Buckles.

Such honors have been granted in the past for civil rights figure Rosa Parks in 2005 upon her passing. Officer Jacob Chestnut and Detective John Gibson were given such honors after their deaths in the 1998 Capitol Hill shootout.

Surely such honors can be shown for a brave generation by honoring their passing through the last Veterans passing?

If ever there was a time to put partisanship aside and just be Americans, it should be to come together and show honor to a previous generation now gone.

Unbelievable that anyone can think the above, much less ask it. But, on of the union rioters in Wisconsin did just that. More than just that in the video, but it shows the ongoing attitudes and that others completely miss who is paying their wages and benefits.

But, “Why do you have a right to your money?” That has to be the most ludicrous question I have ever heard.