By now, the entire world knows that pres__ent Obama has flubbed protocol in dealing with our good friends, the British. He showed a total lack of class by giving the British PM 25 DVD’s that won’t even play in England!

Now, he further embarrasses America with his latest trip to Great Britain and his exchange of gifts with their Queen Elizabeth. One is left to wonder just who he has in the Office of Protocol as I’m sure his adolescent daughters could conceive of more fitting gifts to give foreign dignitaries.

Obama’s latest ‘cock-up’ consists of presenting the Queen of England with a video iPod uploaded with,

Additionally, the Queen was presented with a signed songbook, supposedly “rare” by Richard Rogers. It should also be noted that the Queen has had her own iPod for the last 4 years.

In return, the Obama’s received from Her Majesty “a silver-framed, signed photograph of themselves,” apparently a standard present for visiting dignitaries. Was the Queen prepared for a substandard gift? Or, perhaps was she returning the sub-par gift giving that he gave PM Brown? We may never know.

Contrast this with the president mast hated in modern history and who for 8 years endured false accusations of low I.Q., unable to speak properly and who character and style was almost daily assaulted.

In May 2007, towards the end of his administration, President and Mrs. Bush presented the Queen of England with a bronze statuette “High Desert Princess” with a personal inscription on the bottom of the base, a replica of the original statue located at the National Cowgirl Museum and Hall of Fame in Ft. Worth, Texas.

They gave Prince Philip an “exclusive sterling silver eagle box by Tiffany & Co. with personal inscription on the inside lid.” They also presented the Royal Couple with a “leather presentation box filled with a collection of documents from the National Archives, including a copy of an original letter from President Roosevelt to her father, King George, written in 1938 and photos from previous royal visits along with a DVD of the footage from the Queen’s visit to the United States when she was Princess Elizabeth in 1951.”

To our British friends I can only say, “Please forgive us. We all make mistakes and this one will surely be corrected in 2012.”

UPDATE: As the video below shows, the Obama’s committed yet another gaffe in protocol by his not bowing before he Queen and she forgetting to curtsey, as is European tradition.

In another protocol gaffe, Obama did bow before the King of Saudi Arabia, a sign of the Monarch’s power over their subjects. 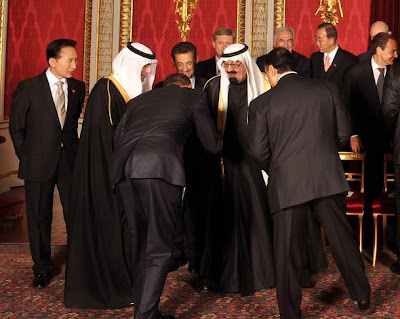 If the photo of Obama bowing isn’t clear enough or if liberals feel it wasn’t actually a bow, video of the bowing can be seen here 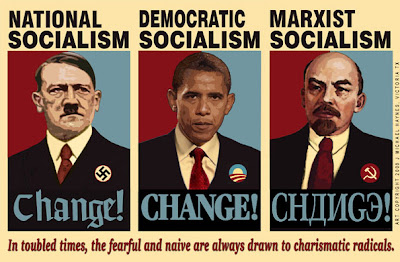 h/t Andy from Beaverton, who should start blogging here because he’s always coming up with such great stuff. How ’bout it?
Tell ’em where you saw it. Http://www.victoriataft.com

Or listen tomorrow between 5-8pm on KPAM 860.
Or get on email list: standup@kpam.com put “Tea Party” in subject line.
Or follow me on Twitter or Face Book.

h/t Andy from Beaverton, who should start blogging here because he’s always coming up with such great stuff. How ’bout it?
Tell ’em where you saw it. Http://www.victoriataft.com