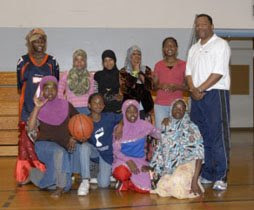 The Portland Public Schools say anybody can join the team but that doesn’t appear to be the basis on which the City of Portland gave this grant to the Hosford School team (see below). The school “community” asked for the money so the girls could play basketball and still maintain their “Muslim beliefs.” The girls play in a Portland Park and Recreation league. The City Attorney, Linda Meng, was not available for comment nor was the Hosford principal, who coaches the team as a volunteer.
Here’s the description of the grant from the City of Portland Vision into Action (here):

The African Girls Basketball Team will build athletic and communication skills for girls who were born and raised in Kenya and Somalia and now attend Hosford Middle School. The program will help to bridge the social chasm that exists between this immigrant population and others students attending Hosford Middle School. The typical basketball uniform will be modified to conform to the girls’ Muslim beliefs, allowing the girls to maintain pride in their cultural and religious heritage while participating in this mainstream activity

As a mother I’m all about kids doing these about which they’re passionate, being part of a community and sharing their culture with others, but this looks like an exclusive team for the Muslim kids using government money, a grant written by a school “community”–the government– in other words.