Pastor Robert Jones of the Oak Park United Methodist Church appeared before an informational hearing on emmissions was interrupted, as he was saying how when government imposes mandates and taxes, it hurts the poor and vulnerable, by Democrat Sen. Pat Wiggins. She blurted out, “Excuse me, but I think your arguments are bull—-.”

Is this how we can expect to see Democrats reacting to those who disagree with them in the future?

Would anyone on the left sit still if a White Republican told Barack Obama his arguments were “Bull—-?”

Don’t wait for others to do your job–YOU do something NOW. Here’s where you can go to help. Drill Here, Drill Now, Save Money.

“Now’s the time for the American people to bring the lightning and thunder.

Use the hyperlink below to send your urgent and personalized Blast Fax Messages to President George W. Bush, Senators Graham, Thune, Chambliss, Corker and Isaakson and each and every Member of the Republican Leadership of the United States Senate and the United States House of Representatives.

Tell them that this ill-hatched plan from Graham, Thune, Chambliss, Corker and Isaakson MUST NEVER SEE THE LIGHT OF DAY!

AOL Members May Use This Hyperlink

Tell these guys we want real reform; not the facade they’re offering to give the Dems a political fig leaf to cover themselves on the energy issue for November. 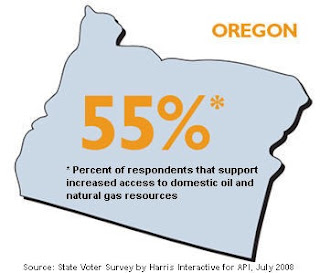 Pew, Zogby and even CNN are discovering that the majority of Americans, including Oregonians and Washingtonians are tired of spiraling oil and gas prices and see our best choice for relief is more energy supplies.

While conservation is still desired, it isn’t nearly enough. Americans all over the nation are realizing that conservation alone will not keep our society running and maintaining our lifestyle. Increasing domestic supply is the best immediate answer while alternative energy sources are discovered and perfected.

Data from the Federal Government reveals the U.S. has enough oil and natural gas to fuel more than 65 million cars for 60 years and enough natural gas to heat 60 million homes for 160 years, yet 85% of the outer continental shelf and 83% of onshore federal lands remain off limits to drilling for our own energy sources.

Are we in danger of depleting the earth’s oil? Some don’t think so.

The American Petroleum Institute has prepared a “Truth Primer” showing all aspects of why we saw such a drastic increase in cost the last year, to include the decline of the dollar, world unrest in Oil Producing Nations and a breakdown of how every dollar we spend at the pumps is broken down.

Separating the Rhetoric from the Reality, API supplies us with real answers to real questions, instead of the usual political rhetoric we continue to hear.

Bottom line is, America has energy needs and our own sources remain locked away from our use due to government policies. One party remained behind while the other enjoys a 5-week paid vacation, hoping to get some relief for Americans.

President Bush lifted the Presidential ban on drilling our own resources. Speaker of the House, Nancy Pelosi refused to allow any discussion or even an up and down vote on lifting the congressional ban and left, with her party, to relax and stump a failing book.

The U.S. Department of Energy estimates that fossil fuels will continue to meet at least 80 percent of our energy demands through 2030. Where we get it from depends a lot on you.

Do you want more elected officials who place snorkeling in the Galapagos above our needs? Or, ones who remain to fight for your interests?