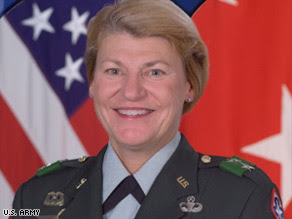 He has now added yet another first by nominating, for the first time in our history, the very first female for Four Star General.

Due to past regulations women have been denied the highest General Rank of the Military, but that has changed. Lt. Gen. Dunwoody said,

“I am very honored but also very humbled today with this announcement. I grew up in a family that didn’t know what glass ceilings were. This nomination only reaffirms what I have known to be true about the military throughout my career … that the doors continue to open for men and women in uniform.”

Lt. Gen. Ann E. Dunwoody must be confirmed by the Democrat Majority Senate, who has shown a proclivity to hold up some of the President’s nominations.

It remains to be seen if President Bush will receive any credit for yet another milestone in advancing minorities.