For all those Obama Supporters salivating over their false messiah, his campaign today unveiled a new “Presidential Seal” to hang on podiums he speaks at, just like a real President. 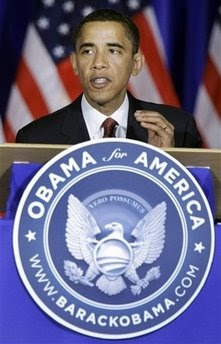 Not exactly like the United States Presidential Seal used by all Presidents, but a close fascimile.

E Pluribus Unum, Out of many, one, is replaced with Vero Possumus, roughly translated from Latin as “Yes We Can.”

The Eagle on the regular Presidential seal has a shield over the eagles breast, but Obama’s has his “O” campaign logo with a rising sun. 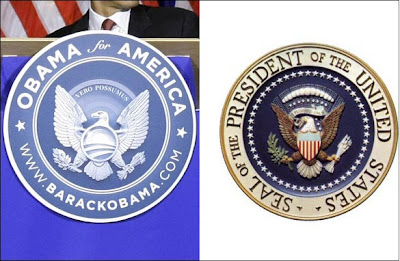 About the only thing missing is some representation of the 57 states.

“Succumbing to an avalanche of criticism, Sen. Barack Obama’s campaign has apparently decided to back away from its trial balloon of a new presidential seal.”

““That was a one-time thing for a one-time event,” Robert Gibbs asserted to CNN about the rather intricately designed seal that made its debut last Friday.”