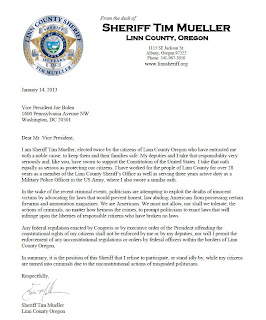 Since the days when the legend of Wyatt Earp was borne, Sheriffs (with a capital S), have been an independent and often interesting lot. The proof can be found in the statutes of law that now that define the unique powers of the office and gives strength to their claim of independence.

Because the Office of Sheriff is generally the only office of law enforcement authority in our country that is elected by those that the office serves, Sheriffs are fierce defenders of that independence. They believe and understand the responsibility that comes with that independence.  It is both their duty and in a very real sense, the perception of the unique nature of the office by those they serve that requires them to speak or act when others cannot or feel powerless to do so.  The personal consequence of acting on that independence must always give way to greater protections those powers offer to a citizenry that places a high value on that independence.

So no one should have been surprised this week when in open letter to the public Sheriff Tim Mueller from Linn County Oregon refused to accept President Obama’s new gun control initiatives carte blanche or for that matter perhaps any part of it. Putting aside agreement or disagreement about his position, read and feel the ferocity of the independence of rights he claims to lead his office and preserve the Second Amendment right for his citizens.
Every Sheriff is different and every Sheriff’s political environment can by very different lending to how much and how often of that independent muscle gets flexed effectively. For instance the muscle man of Sheriffs resides is Maricopa County Arizona. In Maricopa County Sheriff Joe Arpaio reigns supreme. Sheriff Joe did not waste time or lose sleep waiting for yesterdays underwhelming “gun control”reruns instead of “violence control” strategies. He announced last week he was arming of 500 trained volunteers to increase the school security presence. And believe me he is underway.
Likewise there is no lack of clarity regarding how Sheriff Mueller’s views the strength and the independent responsibility of the Office of Sheriff . Words like “unconstitutional regulations…offending the constitutional rights…unconstitutional actions of misguided politicians…and refuse to participate” shows plenty of flex. Unfortunately when our Sheriff’s feel a need to flex
What is troubling is that our nation’s law enforcement leaders are distracted by in fighting over very old and very tired, misdirected, go nowhere and pretend gun control proposals like we have heard many times before; before Columbine, before the 500 street gun deaths in Chicago last year, before Clackamas Town Center, and before Newtown.
But I guess there is nothing wrong if you think a Ground hog’s Day strategy sells politically and you don’t mind wasting more American lives because of the lack of real political courage.
In the meantime the violence caused the lack of a comprehensive and well funded mental health strategy will go on unchecked. Add that fact to the lack of federal and state law changes which emphasize individual responsibility of gun owners. We will continue to get absolutely nowhere in controlling our controllable violence and the tragedies will continue to shake our sense of safety to the core of our Second Amendment rights.
Good for Sheriff Mueller regardless if I agree with him or not. It is the risk of which political courage is made. I can understand and appreciate his position. However I also know that acting on the perceived need to take such a public and controversial position stirs concerns in the community which only highlight our political failures.
At the famed Tombstone Arizona OK Corral in 1861 the Earp Brothers and Doc Holliday  shot it out over an estimated thirty second period with the outlaw cowboy gangs known as the  Clantons and McLaurys. Only Wyatt Earp escaped unharmed
During that very lawless period in open range period of the western United States the Earps acting as Town Marshalls proposed disarming everyone by having each individual turn in their sidearms while in town, including the “bad guys” in a effort to stop increasing street violence.
And the town disarmed but the bad guys were not having nothing of it and mixed with a general dislike and disregard for the law in general violence rained down at the OK Corral.
150 years later we are still talking about disarming the lawful and the bad guys will have nothing of it.
We have not learned much have we ?