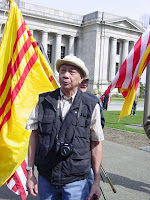 Most of us have heard the derision against the ARVN (Army Republic of Viet Nam), “Want to buy some ARVN rifles? Never been fired and only dropped once!” That it is a rehash from earlier times makes it no less stinging in its denunciation of the South Vietnamese Forces that fought in South Viet Nam many years ago.

It’s also very untrue. The South Vietnamese soldiers, sailors and airmen fought for their country as hard as any other soldier ever has.

While America lost over 58,000 of our sons in Viet Nam, South Viet Nam lost about 266,000 of theirs. In all, the South Vietnamese Forces were effective fighters, even though they were often under trained and under armed while facing a hostile communist force well trained and well armed by the Communist Chinese and the former Soviet Union.

Knowing this, I am left perplexed reading the Olympian’s headline, Plan to honor Vietnamese soldiers on memorial in Olympia angers U.S. vets.

It seems that a small band of U.S. Veterans groups, Vietnamese Veterans and community members has been working with the State Department of Veterans Affairs to add an inscription alongside the Vietnam Veterans Memorial in Olympia to honor both Republic of Vietnam and American soldiers who fought in Viet Nam.
Private donations are being sought for a simple small inscription to be placed adjacent to the Viet Nam Memorial in the Capital Campus in Olympia. 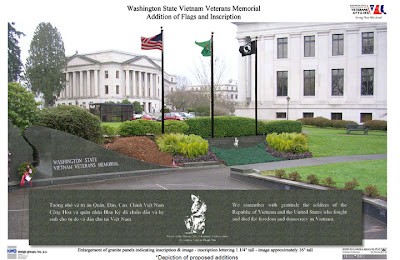 The inscription would read in English, “We remember with gratitude the soldiers of the Republic of Vietnam and the United States who fought and died for freedom and democracy in Vietnam.”

It would also be engraved in Vietnamese.

It is tragic to see former Combat Medic, Hal Lymus who was instrumental in raising the funds to construct the Viet Nam Memorial in Olympia among those expressing strong opposition to this project. While I respect his right to be opposed, I disagree with his reasoning.

He says, “We have nothing against the Vietnamese community whatsoever. It’s just that this wall is meant for one thing: the Washington citizens who died or are missing in action and for the guys who died as a result of their injuries.” He added in regards to the 1,116 names of Washington State citizens engraved on the Memorial, “A lot of these guys died in my arms.”

We lost 13 in my unit during my own 18 months in country. My best buddy was shot down and medevaced out to Japan before I could even see how he was. So I understand the intent of the Memorial, but I also see that many who were forced to flee South Viet Nam settled in Washington and were citizens when the Memorial was dedicated on May 25, 1987.

I also understand the bitterness many of us still feel concerning how we were received coming home from Viet Nam and the hostility shown us. That is a large part behind so many states and Washington D.C. dedicating specific Memorials just for our Viet Nam lost.

But I am also reminded it was not the Vietnamese refugees fortunate enough to make it to America after our government turned their backs on the struggling South Vietnamese who treated us that, but our own citizens.
Comments from the Vietnamese Community include, “The addition gives us a place to show our respect and remember our love ones who died in the war. After the war, our war dead have no place of honor in Vietnam. Their cemeteries were destroyed or moved by the communists.”

Dale Parsons a former Platoon Sergeant says, “I think it honors all those who fought and served in Vietnam. It’s about both countries; we fought side by side.”

A former infantryman named Lee adds, “It was pretty remarkable what happened there. There was a lot of testimony. A lot of tears were shed. … Everybody we talked to said, ‘Wow, great idea’.”

Still, there are those who seem to still be clinging to the myth of the cowardly South Vietnamese Soldier like Chuck Manley of Tumwater who says he is “digging in for a fight.” He says he has spoken to several Veterans about the addition of the inscription and received answers of “not no, but hell no.”

Manley also said, “This thing is going to turn into a battle. We’ve got numerous senators and representatives who are with us on this, who are concerned about it. All this project is going to do is cause bad and hostile feelings between Veterans, Citizens and the Vietnamese community.”

I find it very disappointing that there are those so adamantly against honoring our allies and citizens in Washington State that they say they are “digging in for a fight” and it’s “going to be a battle.” 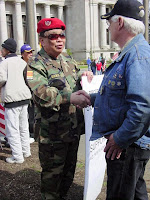 Over the years I have had several Vietnamese, seeing me in my Vietnam Veterans Cap I am noted to wear, walk up to shake my hand and thank me for fighting in their country. The lady that cuts my hair was one of the Boat People who escaped in 1980 and now has grown sons of her own, all of whom either have or are serving in the American Armed Services, including Iraq and Afghanistan.

These people were not our enemies, they were our allies. And, for every tale heard of an atrocity committed, there were a thousand incidents of bravery and compassion that never made the news.

Supporters have already indicated they are not willing to further divide people over this and if the opposition is enough, will call it off.

I think the most tragic part of this is that those who fought so bravely and were basically sold out by a weak spine congress due to spoon fed disinformation from the anti-left and like John ‘F’in Kerry may be denied a simple honor from their fellow citizens of Washington State.

We Viet Nam Veterans did not receive a “welcome home” and have welcomed each other home over the years.

I think it is about time we welcomed the Vietnamese refugees to their new home.