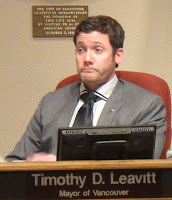 The ongoing saga of Vancouver City Council versus the citizens of Vancouver was elevated up a few notches with a request made under Washington Public Records Law.

“Members of the Vancouver City Council, six of them the subject of a public records request for months of email correspondence, lamented the wide net cast by the request and the cost of the request to the city at a council meeting Monday.”

“The number of documents we’re talking about can number in the tens of thousands, and every one of those documents has to be read by somebody to determine whether it’s disclosable or not,” Vancouver City Manager Eric Holmes said. “We will be responsible to those to fulfill our responsibility under the statute, but it is a pretty substantial burden on our staff resources.”

Leavitt, still licking his chops over successfully modifying citizens speaking rights before the ruling class said, “It’s going to cause a use of city dollars and resources we could otherwise be putting out on the streets in the form of police officers and firefighters.”

This from the same Mayor who doesn’t have a problem hanging the albatross of the Columbia River Crossing Project, including Portland’s financially failing Loot Rail around future generations necks.

Perhaps he shouldn’t have lied to voters on opposing tolls to be elected Mayor.