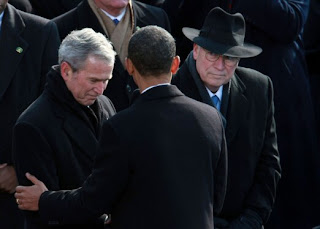 August 17, 2009 Barack Obama, current occupant of the Oval Office, made a speech before the Veterans of Foreign Wars Convention in Phoenix, Arizona.

In that speech, the glib Obama stated, “I will only send you into harm’s way when it is absolutely necessary. And when I do, it will be based on good intelligence and guided by a sound strategy. I will give you a clear mission, defined goals, and the equipment and support you need to get the job done. That’s my commitment to you.”

Two months after receiving a request for that “equipment and support you need to get the job done,” Obama is only close to deciding when he might decide on what to do.

Wednesday evening, October 21, 2009, V. P. Dick Cheney, after receiving the Center For Security Policy’s Keeper of the Flame Award made a speech in which he said of the Obama regime, “It’s time for President Obama to make good on his promise. The White House must stop dithering while America’s armed forces are in danger.”

It’s time to wage war on the terrorists instead of warring with Fox News.

UPDATE: As expected, the Obama regime adamantly denies they are dragging their feet saying, “What Vice President Cheney calls dithering, President Obama calls his solemn responsibility to the men and women in uniform and to the American public.”

Left unexplained is how he was so decisive in rapidly dispatching his goons against Fox News.