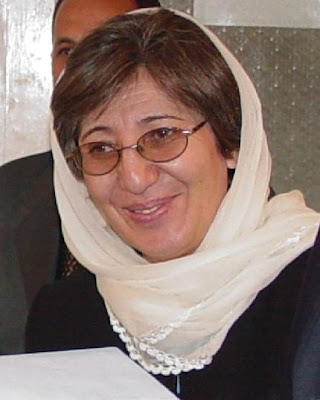 H/T Weekly Standard. Sima would have been my choice. But, of course, anything having to do with fighting for women’s rights and, indeed, their very existence in this 13th century hell hole, would be overlooked. Unless Jimmy Carter said it was OK, I mean.

From the Weekly Standard here.

Meet the People Who Were Passed Over for Obama

Sima Samar, women’s rights activist in Afghanistan: “With dogged persistence and at great personal risk, she kept her schools and clinics open in Afghanistan even during the most repressive days of the Taliban regime, whose laws prohibited the education of girls past the age of eight. When the Taliban fell, Samar returned to Kabul and accepted the post of Minister for Women’s Affairs.”

“Dr. Denis Mukwege: Doctor, founder and head of Panzi Hospital in Bukavu, Democratic Republic of Congo. He has dedicated his life to helping Congolese women and girls who are victims of gang rape and brutal sexual violence.”

Handicap International and Cluster Munition Coalition: “These organizations are recognized for their consistently serious efforts to clean up cluster bombs, also known as land mines. Innocent civilians are regularly killed worldwide because the unseen bombs explode when stepped upon.”

“Hu Jia, a human rights activist and an outspoken critic of the Chinese government, who was sentenced last year to a three-and-a-half-year prison term for ‘inciting subversion of state power.'”

“Wei Jingsheng, who spent 17 years in Chinese prisons for urging reforms of China’s communist system. He now lives in the United States.”