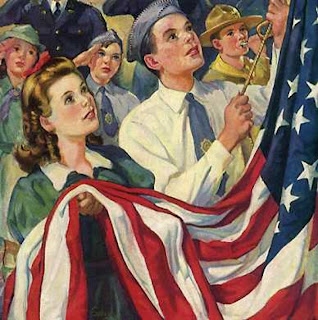 Citing the inability to come to a ‘consensus,’ the Mc Minnville City Council has put off at least three times a proposal calling for the council to recite the Pledge of Allegiance before each meeting. The issue has made it on the agenda for October 13th. They could kick the can down the road again for all we know.
Why can’t seven Americans bring themselves to pledge allegiance to their country? The city council member who authored the resolution told me he has no idea. I think he does but he won’t say.
Rees Lloyd, fellow blogger here at Victoria Taft.com says, if council member refuse to pledge allegiance to their country shouldn’t they say so BEFORE they’re elected? As a constitutional lawyer (and Veterans activist) Rees Lloyd says,

That being said, what’s wrong with the Mc Minnville City Council? What prevents them from spending 30 seconds pledging allegiance to their country? If they can’t, shouldn’t they explain why?
Tell ’em where you saw it. Http://www.victoriataft.com