Spreading across the news is a story out of Lakeville Massachusetts where overnight, vandals carved into a golf course’s green “I Swastika Obama.” 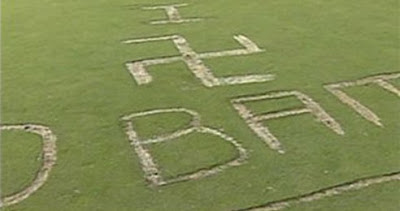 Inexcusable and indefensible, whoever did it, but look closer. It isn’t the Nazi Swastika but the symbol still used by Buddhist’s and Hindu’s in their religion today throughout Asia as a good luck sign.

As can be expected, knee-jerk reactions, with no knowledge of whom or why, blame Republicans as “Nazi’s,” “Rednecks,” “Supremacists” and any other derogatory term one can find to throw at only Republicans.

I am sure any neo-Nazi would know how to draw their hate symbol, but what else could such vandalism represent?

A supporter of the Dalai Lama giving Obama their symbol of good luck? Doubtful.

My guess is the former.

Are we witnessing steps to America’s Reichstag Fire?